Prior to the release of this trailer at San Diego Comic Con, I had no real expectations for Ready Player One. I had heard the book it's based off of is really good, but that's not really enough to garner true enthusiasm for me. Most of my interest in this film came from the single fact that Steven Spielberg was directing. He is one of the greatest filmmakers of all time, and anytime he is doing a new movie, you immediately have my attention. So I was certainly aware of Ready Player One, but it wasn't a movie that was exactly on my radar. When I heard they would be doing a Comic Con presentation for the film, I didn't think much about it. It didn't even occur to me that they would show a trailer. Even if the thought had crossed my mind, I wouldn't have exactly cared. If the movie had come out a day before this trailer was released, I wouldn't have exactly cared to go see it. But now my tune has changed. Warner Bros. released the first trailer for Ready Player One during their Comic Con panel, and this is certainly one to keep your eye on!

This trailer was absolutely insane. I felt like I was on an acid trip, far more than a movie like Doctor Strange actually made me feel. The visuals are stunning. It's not just that they have a bunch of pretty CGI shots up on the screen; it's the creativity behind the shots. It's all the brilliant ideas shown within the shots. This feels like it has the imagination of Valerian and the City of a Thousand Planets, but will actually have a good story and decent characters. This trailer was a visual marvel, and I couldn't keep my eyes off of it. I posted this on Twitter, and I think it deserves repeating: Steven Spielberg is the oldest young director in the business. He has the wisdom and the experience of a veteran director, but has the imagination and creativity of a brand new filmmaker. It's incredible. There are a lot of elements from other movies incorporated into this one. We see the Iron Giant, the DeLorean from Back to the Future, Orcs from The Lord of the Rings. I didn't read the book, so I don't know why all of these things are in this movie. But it looked really cool on screen, and stood out as something incredibly different. And that sequence near the end, on the highway, was phenomenal. That looks like it could be the highlight of the movie. Overall, with this one trailer, my expectations went from zero to a hundred. I am now incredibly excited to see Ready Player One, and this is going to be one hell of a movie to see on the big screen! 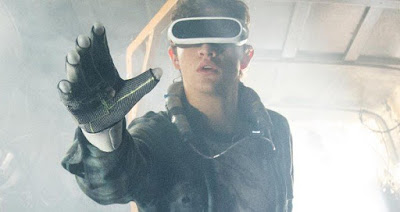 What do you think? Did you like the first trailer for Ready Player One? Are you looking forward to seeing the film? Were you happy with San Diego Comic Con this year? Leave your thoughts in the comments section below.