The first teaser trailer they put out for Thor: Ragnarok is, I believe, the best trailer of the year. The amount of punch it packs in such a small period of time is incredible. I loved the visuals, and the style of it. The colors really pop, and I love the sense of direction Taika Waititi is bringing to this movie. I thought the first Thor was good, but not nearly as good as other Marvel movies have been. And Thor: The Dark World is one of Marvel's weakest films. So Ragnarok has a serious shot at being the best Thor film we've seen, and the first trailer certainly set a high bar. Like I said, it's my favorite trailer of the year. The visuals, paired with the Led Zeppelin song, made for a badass trailer that I never get tired of seeing. Trust me, it plays in front of almost every movie I see in theaters, and I'm still not tired of it. But with San Diego Comic Con this week, it seemed likely we would get a new trailer, one that would hopefully give us a better look at the story. And a new trailer we got indeed.

I don't think this trailer is nearly as good as the first one they put out, but it is still a very good trailer. We do get a much better sense of the story this time around. What's great is that we know more pieces of the story than we did before, but we don't know exactly how it all comes together. This trailer gives enough story beats for us to be satisfied, but does not venture near the danger zone of spoiling the film. It's very well crafted in that sense. I loved all the stuff with the Hulk (Mark Ruffalo), and I think he'll end up stealing the movie. Marvel has done an excellent job of utilizing him as a side character in their cinematic universe, and I think Ragnarok will be yet another great example of that. It's great to see Tom Hiddleston back as Loki. He is always a highlight of these Thor movies for me. However, the subplot of Thor (Chris Hemsworth) teaming up with Loki to stop a bigger threat is very similar to what happens in The Dark World, but I trust that Waititi will change it up enough so that it doesn't feel the same. While I thought Cate Blanchett was more badass in the last trailer, but she looks great here. And we finally get to see a quick shot of Surtur at the end! I hope there's a little more to him, and he isn't just thrown in there to be a big bad villain for the hero to face, like Dormammu was in Doctor Strange. That character was utterly wasted and just thrown into the third act. So hopefully Surtur won't be the same case. Overall, I liked this trailer a lot. I have a much better sense of the story now, and I liked all the stuff involving the Hulk. However, I would say I still prefer the first trailer over this one. 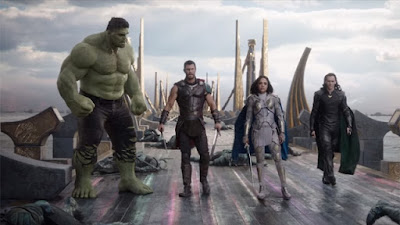 What do you think? Did you like the new Thor: Ragnarok trailer? Are you looking forward to seeing the film? Were you happy with San Diego Comic Con this year? Leave your thoughts in the comments section below.