First Trailer for The Disaster Artist

Most film fans know of the infamous movie The Room, said to be the worst movie in all of cinematic history. I have not seen the movie myself, but I certainly know of it, and am well versed in its infamy. And when I heard that James Franco was directing and starring in The Disaster Artist, a film about the making of The Room, I was immediately intrigued. I don't know the full story behind the making of the movie. I know that things got a little crazy, and that there is a lot of story to tell. So I certainly look forward to learning about just what went so wrong with The Room. What I didn't realize was how stacked the cast was. In addition to James Franco, you have Seth Rogen, Dave Franco, Bryan Cranston, Zac Efron, Alison Brie, Zoey Deutch, Josh Hutcherson, Kristen Bell, Judd Apatow... it's a packed cast, and this film sounds phenomenal. So ever since I first heard about it, I've been looking forward to seeing a trailer for The Disaster Artist.  It has been screened at a few festivals already, and the word is that it's a strong Oscar contender. It does come out in the fall, lending itself to be just that. But that's something that still remains to be seen. But today, however, we got our first trailer for The Disaster Artist.

I absolutely loved this trailer! It was simple, and yet incredibly effective. It shows us so much about what this movie is going to be like, and I think it was perfect for our first look at the film. The scene played out in the trailer is the most infamous scene from The Room, the one most universally recognized. So it just makes sense to lead with that. And by showing us just how painstaking it was to film that one scene, you realize a couple of things. You can sort of understand why The Room may be as bad as it is, considering Tommy Wiseau's (Franco) dynamic with his crew. How everyone is pretty much just a "Yes Man". You also get a sense of how The Disaster Artist will play out. What we'll be seeing about the making of The Room. I wasn't expected for just how funny it would be. I was laughing throughout the whole trailer, and it was perfectly edited. Everything came together in the most excellent way to deliver us a great first teaser. Eventually, I do want to see a full trailer that gives me a larger sense of what to expect with this movie. Is this just focusing on the filming? Is it focusing on the reaction to the movie? These are some questions I do want to be answered, and that I would like to know eventually. But for a first look, for a first teaser, I thought this was fantastic, and absolutely fitting. 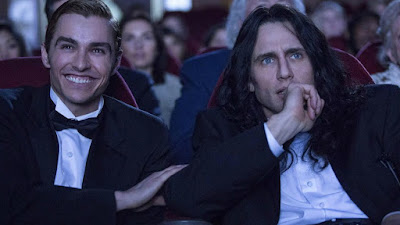 What do you think? Did you like the first trailer for The Disaster Artist? Are you looking forward to seeing the film? Leave your thoughts in the comments section below.