War for the Planet of the Apes SPOILER-FREE Review 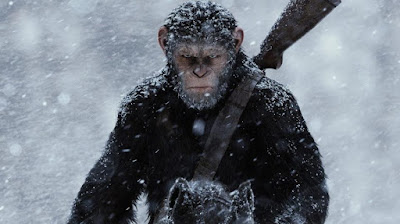 I have been a fan of this new Planet of the Apes franchise ever since I first saw Rise of the Planet of the Apes in 2011. I don't think anyone was prepared for exactly how good that movie was going to be! It was absolutely incredible, packed to the rim with emotion. If Andy Serkis ever deserved an Oscar nomination the most, it was for that movie. Dawn of the Planet of the Apes came out next, and I liked it a lot. However, I personally didn't like it as much as I liked Rise. But with two awesome movies under our belts, I couldn't wait for War for the Planet of the Apes. One of the greatest things about this franchise was just how much class Fox handled them with. They were never made to be giant summer blockbusters; they were smaller, contained, more character-driven stories that made a lot of money because of just how good they were. Even after Rise exceeded expectations, it would've been easy for Dawn to become a giant blockbuster. While it was bigger, it was still character-driven. So, going into War, I was incredibly excited. I actually did an in-theater triple feature. They played Rise, then Dawn, and then concluded with screening War. Seeing them all back-to-back-to-back like that really enhanced the experience for me. For the first time, I realized that I liked Dawn more than Rise, but it was also a perfect segway into the third film. War for the Planet of the Apes is a far different movie than I expected it to be, but is still a very good film.

Two years after the events of Dawn of the Planet of the Apes, Caesar (Serkis) finds himself at odds with the Colonel (Woody Harrelson), a quarrel that will decide who rules the planet. 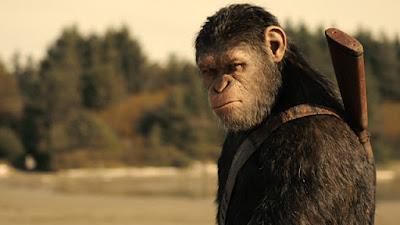 Once again, Andy Serkis is mesmerizing as Caesar. I still think his performance to beat (not just with Apes, but for his entire career) is Rise, but that doesn't take away at all from the incredible job he did with this film. He brings a nuance to the character that really makes him stand out. Caesar is so well written, and so well acted, that it makes him honestly one of the best cinematic leading characters in recent history. The visual effects are also stunning once again. The leap in CGI from Rise to Dawn was very noticeable, and I think Dawn was robbed of winning the Oscar for Best Visual Effects (it lost to Interstellar). The leap in visual effects from Dawn to War isn't as drastic as Rise to Dawn, but the CGI is still absolutely incredible. What they are able to do with CGI nowadays, in terms of giving us truly believable computer generated characters, is just mindblowing. With this film, they add new elements to it. We get to see apes in the snow, or drenched in water. Just how life-like and believable it looks is insane. But the rest of the performances that bring the CGI to life cannot go unmentioned. Actors like Terry Notary and Karin Konoval, whose brilliant performances linger in the background, allow these characters to feel like living, breathing apes. Specific to this film, Woody Harrelson plays the villain, the Colonel. Harrelson gave a really good performance, but I wish they had done a little bit more with the character. They tried to give him more substance and dimension, but it came across more as an exposition dump rather than true character development. He wasn't as rich of a villain as Koba was in Dawn. Again, Harrelson gave a really good performance, but I wish they had utilized the character a little bit better.

With War, we once again get a smaller, more contained, character-driven story. I think this movie has a very good story, and I was engaged the entire time. What threw me off was that this wasn't the film I was expecting it to be. Its title can be misleading; there is no war. There are actually very few action sequences. This is not the battle to decide the fate of the planet. When you hear the title "War for the Planet of the Apes", you have a certain image in your head. You envision apes versus humans, in a war that will annihilate most of the human species, and leave the apes in control of the planet. The legendary battle that gives way to the original Planet of the Apes, where the apes have control of everything. But that's not what this movie is. Instead, this is more of a spiritual battle for Caesar's soul. After certain events, Caesar is thrown into the deep end, and struggles with what kind of ape he wants to be. He cannot escape his rage and his hate, but also cannot deny his good nature. When watching War, I liked the direction they went in. It kept in line with the smaller, more contained nature of this series. It didn't sell out in becoming a giant summer blockbuster. It was more restrained. However, I did expect the war, and we didn't get it. The movie we got was a very good film, but it wasn't what I thought it was going to be. Thus, I have to watch it again to truly appreciate the movie they made. Right now, I have some conflicting thoughts on it. However, I think I will enjoy it a lot more when I see it again. So keep that in mind as you read the rest of this review. 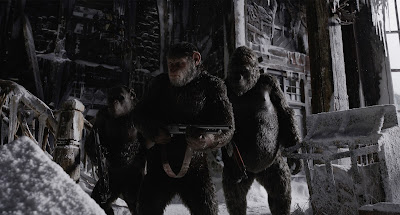 What makes this movie so interesting is that Caesar deals with the ramifications of the last film, which is what makes this all so rich. It hits you most when you watch them all together in the way that I did: each movie flows perfectly into the next. The repercussions of the last film alter the nature of the next, in a way that a lot of franchises often ignore or forget to do. The attention to detail in franchise continuity is deeply appreciated, and it shows just how much care and attention goes into these films. There's also a lot of new additions to the mythology. I won't go into details, but there are new things they did that enriched the larger world, and I really liked what they did with it. The place that we spend the majority of the film in was a really cool idea, and it made a lot of sense. Again, I think I'll appreciate all of these elements a whole lot more when I rewatch it. They also take drastic turns to tie in closer to the original film, but it all felt organic. It never felt contrived or forced. It wasn't like many franchise films these days, where all they're focused on is setting up the next movie. It was slow, gradual developments that got us closer and closer to the world of the original Planet of the Apes, and I appreciated what they did with it. Within the story, there are also some very strong biblical allusions. It was strange at first, since they were absent from the first two films, but once I saw where they were going with it, I thought it was really well done. It strengthened the story, and made it a much richer narrative.

I did have problems with this movie, however. Again, some of these issues may be put to rest upon a second viewing, but as of right now, they do stand out as weaknesses. The title is misleading. I think many people will go in with a certain expectation of what this movie will be, and might be disappointed. I don't think that takes away from this being a really good movie, but some people may feel angry and not give it a fair chance. But even if we don't get the "war" we thought we were going to get, it was ultimately missing the finality of this being the last film in the trilogy. After seeing War, I don't think I can make the logical leap from where everything is at the end of this movie to the beginning of the original Planet of the Apes. Now, they may decide to make more movies, continuing to bridge the gap. But since we don't know that to be a certainty, it bothered me that there were still missing puzzle pieces. Even if we didn't get the "war", I think we needed some sort of confrontation between the humans and the apes, and we didn't get it. There is no battle of humans versus apes. Even if it wasn't on a global scale, a smaller battle (along the lines of Dawn) was necessary in my opinion. For the presumable final chapter, we needed the humans to fight the apes, to some extent. Like I said, it didn't need to be a global war that decided the fate of the planet; it could have been a smaller, more personable fight, such as in Dawn. But something was needed in order to bring more finality to this movie, and to this series, and it was missing from War. 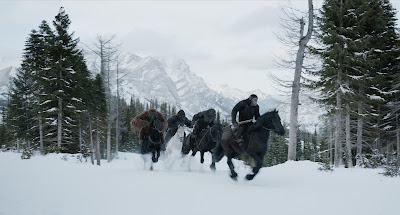 Overall, War for the Planet of the Apes is a very different movie than I expected it to be, but it is still a very good film nonetheless. Once again, Andy Serkis gives a brilliant performance as Caesar. The visual effects are also expectedly breathtaking. This is a smaller, more contained, character-driven story, one that I don't think audiences necessarily expected from a film titled "War for the Planet of the Apes". There are very few action sequences, with the focus instead being on Caesar's internal struggle. I liked the direction they went in, however I thought some finality was missing. Even if it wasn't the global war we expected, some confrontation between the humans and the apes was necessary, and it was missing from this film. My issues with the movie stem more from what I expected it to be, and so I might find it to be resolved once I see it again, now knowing what direction the story actually goes in. But I don't think everyone will be so easy to forgive the film, especially more casual fans. One of the things War excels at is the new additions to the mythology it introduces, as well as the steps it takes to connect further to the original films. These steps did not feel forced or contrived, but were rather entirely organic. The continuity among all of these films is also greatly appreciated, and enriches the overall experience. In the end, War for the Planet of the Apes is not the movie many fans are expecting it to be, but that doesn't take away from the fact that it is still a very good film. Many of my problems with the film may dissipate upon a second viewing, but as it stands right now, I find this movie to be the weakest of the three. Though it is a very good movie, I don't think it matches just how fantastic the first two really are.

What do you think? Have you seen War for the Planet of the Apes? Did you like the film? Leave your (spoiler-free) thoughts in the comments section below.