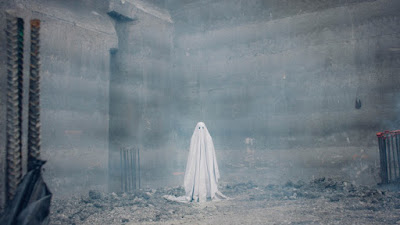 I've been interested in A Ghost Story for some time. All this year, it has been playing at different film festivals, gaining itself a lot of attention. I have read some reviews claiming it to be an absolute masterpiece, and others saying it's rather quite dull. Anytime a movie is as divisive as A Ghost Story is, I'm immediately intrigued. It's almost a calling for me to go check it out for myself, and for me to form my own opinion. The cast certainly also caught my attention. While I personally would not have picked him to win Best Lead Actor at the Academy Awards last year, Casey Affleck is a very good actor. And over the past couple years I have really warmed up to Rooney Mara as an actor. It's to the point where, now, whenever I hear she's in a movie, I get excited for it solely because of her. So their pairing, plus the really good trailer, and the intrigue surrounding it, made for a lot of interest going into this film. Ultimately though, A Ghost Story asks a lot of big and fascinating questions, but it fails to make an engaging film around it.

After dying in a car crash, C (Affleck) comes back to life as a ghost covered in a white sheet. He then watches life go on without him. 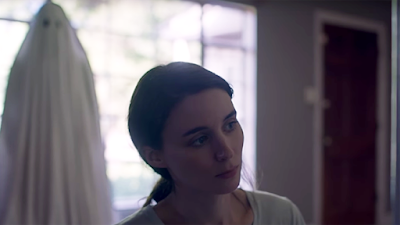 This movie asked a lot of big, existential questions, and I respected it for being so audacious. It does not play it safe, and you have to respect films that have such courage. This has been the entire model of A24 as a studio. They produce these movies that are so experimental and out there, that no other studio would give them the green light. On paper, it's a great idea. Give the spotlight to movies that we would normally not get to see. But, at least in my opinion, it hasn't worked for them thus far. Green Room failed to work as a suitable horror movie. The Witch had an insufferable first half, which overshadowed how great the rest of the film was. And this year's It Comes at Night was an experiment that failed due to its underdeveloped screenplay (you can read our full review for the film here). While the idea of A24 as a studio is great, they have yet to deliver on giving us great, independent film. And A Ghost Story falls into the same trap. This film asks big questions about mortality, the afterlife, time, our legacy as human beings, and they were fascinating questions. However, the movie itself was not crafted in such a way to support these questions. Instead of a movie that asks questions in of itself, and makes you wonder through its storytelling, we get a film that asks questions through a monologue. One monologue in the middle of the film throws all these ideas out there, and while the speech is fantastically written and well acted, it feels incredibly out of place. The movie doesn't make these questions inherently apart of the film itself; you have to be spoonfed these ideas in order for you to even think about them. That shows that this film was not competently made. A well-made movie would show its story, and from the events of the film, you would then ask yourself these questions. But A Ghost Story has to spell it all out for you in order for the thoughts to even cross your mind.

This movie doesn't have a clear focus. The first twenty minutes seem to go in one direction. It then decided to go in another one. Thrown in there is a subplot that seems like it pays off, but when you think out the movie in its entirety, it doesn't exactly make sense. Had the movie picked one of these ideas and stuck with it, I think we could have had an incredibly fascinating film. And in there somewhere is a thought-provoking, engaging movie. But it's bogged down by a lack of focus. You also have unexplainable and inexcusable scenes in there that serve no purpose. I don't consider this a spoiler; I would have appreciated the warning myself. There is a long take, unbroken, of Rooney Mara sitting on the floor eating an entire pie for five minutes. There's no deeper meaning. There's no purpose to it. It doesn't have anything to do with the story. It's just her eating a f*cking pie! And we have to just sit there and watch it. There's another unbroken five minute scene of Mara and Affleck spooning in bed. Nothing happens; it's just them lying in bed. There is no excuse for sh*t like this. You can't tell me that this serves a purpose. And stuff like this makes the film come across as incredibly pretentious. It feels like the filmmakers are some sort of snobs, mocking the moviegoers for not understanding the purity of their art. It's as if they're saying "Stupid audience member. You don't appreciate the raw artistic integrity of Rooney Mara eating a pie! You can't comprehend the larger philosophical undertones, and what it means for the development of the character!" Bull-f*cking-sh*t. It's Rooney Mara eating a f*cking pie for five goddamn minutes while I have to sit through and watch this pointless sh*t! 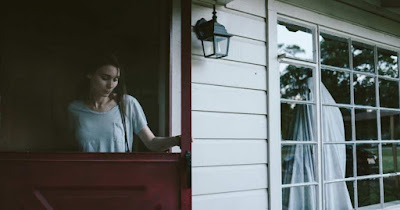 Within A Ghost Story is a good movie. Buried deep within is a fascinating look at life and death, and one's legacy. A look at spirituality. But the movie relies on a monologue to get you to even think about this. A competently made film could have had you asking these questions yourself just through the visual power of the movie. There are too many different directions the movie takes. The lack of focus makes for a convoluted film, one that could have benefited from a single, driving narrative. The film chooses to be driven mostly by its visuals, with very little dialogue. But this fails when the only visuals are someone in the foreground, with Casey Affleck as a ghost standing in the background. And the film feels completely and utterly pretentious by throwing at you these long, uncut scenes of absolutely nothing, and expecting you'll find some deeper, hidden meaning. This is the kind of movie that would have worked as a fifteen to twenty minute short film. Within that smaller context, it could've been incredibly thought provoking. But as a larger, feature length film, it fails to make a competent movie to encompass its large ideas. It relies on a monologue to be the core of the film's identity, instead of letting the movie itself allow you to ask these questions. In the end, A Ghost Story is another A24 movie that fails on a fundamental level. I give it a lot of credit for being as ambitious as it is, but it ultimately did not make for a good movie. 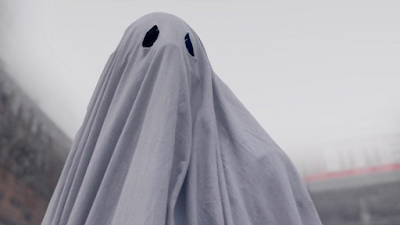 What do you think? Have you seen A Ghost Story? Did you like the film? Leave your (spoiler-free) thoughts in the comments section below.