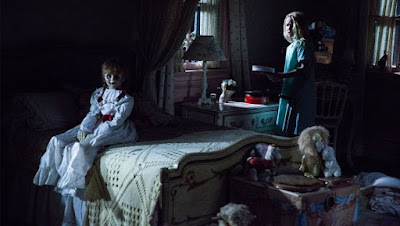 I have been very excited to see Annabelle: Creation, the next chapter in the accidental The Conjuring Cinematic Universe. The first Annabelle film was not a big hit with the fans, though it was a monster success at the box office. I never saw the movie myself, but I did not hear good things about it. To improve with the sequel, Annabelle took the Ouija root, where they made the sequel a prequel and a period piece. It worked for Ouija: Origin of Evil, as there we got a really great movie. And it seemed like they were going for a similar thing with Annabelle: Creation. They got David F. Sandberg to direct, who did Lights Out last year. I thought that was a good film, and showed that Sandberg is an incredibly talented and adept director. So I was very excited to see what he would do in The Conjuring Universe. The film first screened for critics a couple of months ago, and I heard nothing but rave reviews coming out of it. So all of this combined had me really excited for the film, but it did, unfortunately, disappoint me. Annabelle: Creation is masterfully made, and I appreciate its craftsmanship. But its scares are utterly basic and elementary, and never get past the watered down, PG-13 level horror, though the movie itself is rated R.

Years after the untimely death of their daughter, a husband and wife allow a Catholic orphanage to move into their house. However, things take a dark turn when one of the girls discover a doll locked away in the closet. 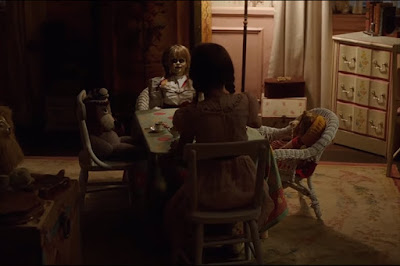 Well directed and well made horror movies are hard to come by, so when we get one like Annabelle: Creation, we have to take a minute to appreciate it. The production design is beautiful. You can tell a lot of time and effort went into creating the house that the majority of the movie takes place in, and it fits into the atmosphere of the film perfectly. While the cinematography isn't necessarily startling, it is very effective. This was not a rushed job at all. There is one shot in particular that I found to be absolutely beautiful. All it is is an establishing shot of a field, but everything that is going on in the shot just makes for a really gorgeous moment. Once again, David F. Sandberg shows how good of a director he is. I do have problems with the writing, which I'll get into later, but everything in terms of the direction was spot on. From the opening shot, you can tell that this movie is slowing down to tell a worthwhile story, and I appreciated that. There are a lot of very simple scenes in this movie, ones that don't necessarily have any scares or horror in them. They're just there to help develop the characters, and you don't see that in a lot of horror movies today. Sandberg sets a great pace for the movie (for the first act, at least). All of the technical elements behind Annabelle: Creation stood out as being far above average. I appreciated that it didn't fall into the classic trap of horror movies nowadays, where they just rush out a sh*tty film in order to get it into theaters to make a quick buck. You can tell they put a lot of time into making this movie, and I appreciate that level of care.

Where this movie falters is the script. It's a weak screenplay. Gary Dauberman wrote this movie, and he also wrote the first Annabelle. That was not a smart decision on the studio's part to rehire him, since so many people had problems with the last movie. I also noticed that Dauberman wrote the screenplays for It and The Nun, which makes me lose some faith in those movies. At least with It, there were other writers on board, so that certainly helps. But Dauberman is the sole writer on The Nun, which makes me nervous. Annabelle: Creation is full of cheap, conventional, basic scares. The majority of the movie's horror is a door creaking open, or the Annabelle doll being put in a new place. Movement in the shadows. And it's not done in a new way. It's run-of-the-mill horror that we've seen a thousand times. I think I maybe jumped once, and there were only a couple of things that I found to be actually creepy. It's something I expect from regular sh*tty horror films, but not from a film associated with The Conjuring. This is a very slow movie, and I appreciated it for the first act, because I assumed it was going somewhere. But when we got to the second act, it was still painstakingly slow. And once we got to the third act, which was supposed to be the pay-off, it was underwhelming. This was all well shot and well choreographed, but there just wasn't strong writing behind it. I love the story that was introduced, and I loved all the set-up. It certainly set it apart from other movies in the genre. But when you actually get into the film, it falls into cliched horror tropes that weren't exactly scary to me. There were a group of teenage girls sitting next to me, who clearly snuck into the theater, who were freaking out and screaming at every little thing that happened on screen. This movie is fine for a PG-13 audience, and fittingly has PG-13 scares. But this is an R-rated film, set within The Conjuring Universe. It is deserving of more than simply PG-13 scares. 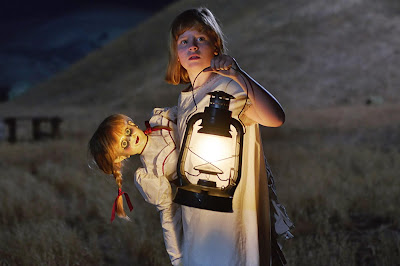 Overall, Annabelle: Creation is a very well made movie with a weak screenplay. The craftsmanship behind the movie, from the production design to the cinematography to the direction, was fantastic. You can tell a lot of time and effort went into making this movie, and I appreciated all of the technical aspects behind the film. It also has a very strong basic story, one that sets it apart from other films in its genre. But the movie suffers from a weak screenplay, and it never recovers from that. The scares in Annabelle: Creation are basic and elementary. A door creaks open. Something is one spot one minute, and then is in another spot another minute. This is stuff that we've seen a thousand times before, and is not particularly scary. And you can make a movie with these kinds of scares, but you have to reinvent it, and do something new and different with it to keep it fresh. But this movie doesn't do that. It has great set-up, and it has all the pieces in the right place, but then it fumbles them. This is an R-rated movie, and it only gave us PG-13 level scares. I do not blame David F. Sandberg. He did as best a job he could with what he was given, and I respect him for it. I am still very excited to see what he does now with Shazam. But I am nervous for The Nun, because Dauberman is writing it. In the end, Annabelle: Creation is a very well made movie, but its weak screenplay keeps it from reaching the full potential that it had. 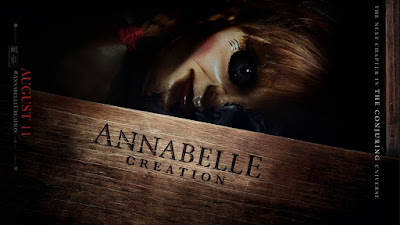 What do you think? Have you seen Annabelle: Creation? Did you like the film? Leave your (spoiler-free) thoughts in the comments section below.