I've always been a fan of the Tomb Raider video games. They were fun, Indiana Jones-esque adventures that I usually tended to enjoy. I never got around to seeing the movies with Angelina Jolie, but from what I've heard over the years, they're not exactly worth checking out. But since we've known that they were rebooting the movies, this time with Alicia Vikander, I have been incredibly on board. Vikander has really broken out into the scene over the past couple of years, and has proven herself to be a fantastic actor. And the fact that she won an Oscar doesn't hurt either. The film seems to be going in the direction of the recently rebooted games, going for a darker, more lifelike take on Lara Croft. And I do think that is the best way to go. The one thing really standing in the way of Tomb Raider being great is the fact that its a video game movie adaptation. We have not had a good video game movie yet, and until we get one under our belt, we will always have to take each upcoming one with caution. Because even ones that have had great casts, great talent behind the camera, and looked to be closely following the source material (Assassin's Creed) have turned out to be giant piles of sh*t. I'm hopeful that Tomb Raider is great, but I have to be cautious nonetheless. However, we now have our first trailer for the new movie.

This is a solid trailer. It told me what I needed to know about the film, and that's pretty much it. It didn't exactly wow me, or show me anything that truly got me excited for the movie. Alicia Vikander looks great. She embodies the character well, and seems to be handling the physical side of the role excellently. The trailer matches the spirit of the video games, which is a good sign. Where my issue with the trailer comes from is the fact that Lara Croft's mission decides the fate of all humanity. I rolled my eyes as soon as I heard it. Why can't this be a personal mission? Why can't it be that her mission decides her own fate, or the fate of one other person? Why does it have to be the entire world? It just cheapens everything else. Perhaps that's a minor part of the film, and it's not really brought up much. But they kind of made it a focus of the trailer, which began to bug me. I want a dark, gritty, but fun Tomb Raider film, and now I'm fearing that it may turn into a cheesefest, along the lines of the original movies. I don't want that to happen. Maybe in the context of the film it'll work better, but right now I'm nervous about that aspect of the movie. Overall, it's a good trailer, but it doesn't exactly get me hyped to see Tomb Raider. 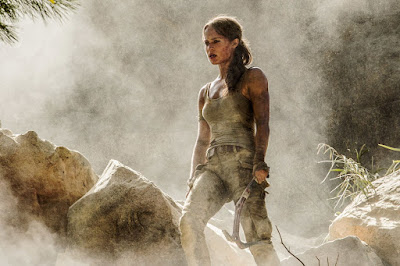 What do you think? Did you like the first trailer for Tomb Raider? Are you looking forward to seeing the film? Leave your thoughts in the comments section below.