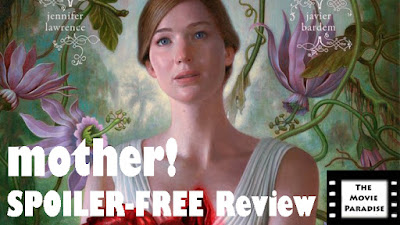 When I first saw the trailer for mother!, I wasn't super on board with it. It looked like a completely conventional haunted house horror movie. But I knew it was going to be something more than that, because of who was involved. It's directed by Darren Aronofsky, who is far from a conventional filmmaker. With him behind the camera, I knew it was going to be far more than just a simple horror movie. Plus, you have incredible talents involved, such as Jennifer Lawrence, Javier Bardem, Ed Harris, and Michelle Pfeiffer. So while it looked to be completely stereotypical and ordinary, I knew it wouldn't really be that. But I wasn't prepared for how impactful and stunning this film was going to be. This movie grabbed and absolutely floored me. I am going to be seeing it again very soon, because I am sure there are bits and pieces that I missed. Right now, I am very close to calling it a masterpiece, and it is without a doubt one of my favorite movies of the year!

A wife (Lawrence) and her husband (Bardem) are caught off guard when total strangers begin showing up at their house. 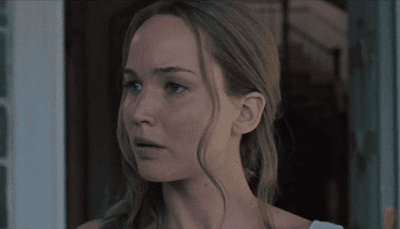 This movie took my breath away. When the end credits began to roll, all I could think of was just how f*cking brilliant this film is! I want to preface this review by saying that I actively avoided any kind of information about what this movie was truly about. I had been told by people that it helps to go in knowing what the movie is really about, and what it all means. But I wholeheartedly disagree with that kind of movie going mentality, and thus I avoided any information about the film. With that being said, there is something I think you do need to know going in. This is not a straight forward movie. If you are looking for a haunted house horror flick with Jennifer Lawrence, this is not that movie. mother! is a deeply complex, analytical, metaphorical warning to the audience. If you watch this film thinking that everything that happens in it is literal, then you will most likely be entirely confused and will probably end up hating the movie. You don't have to know what it all means, but just go into mother! with an open mind. Go in knowing that it is metaphorical; that it isn't straight forward. If you go in understanding that, then I think you will appreciate this movie. That is the only kind of briefing or preface that I personally think the audience needs before seeing mother!.

With that out of the way, now I can talk about why I love this movie so much. I was absolutely astonished by the level of craftsmanship on Darren Aronofsky's part, and just the sheer complexity of the writing. Aronofsky says he wrote the screenplay in six days, which just blows my mind. It is so intricate and delicately designed, that I don't know how he was able to write it in less than a week. I think it just goes to show how much of a pure genius Aronofsky is. This is a movie that is driven 100% by its story and its screenplay. Everything else, from the camera angles, to the score, to the performances, are in service to that script. So it's hard to sit here and say "Oh, well the cinematography is gorgeous" or "Jennifer Lawrence is fantastic in the film", because their purpose was not to stand out on their own. Everything they did was to enrich and drive forward this story, and that doesn't necessarily work for every film, but it absolutely works here. This film is made by the deep complexity of its metaphors and allegories, and by its social and theological analysis of our past, present, and future. Without the strength of its script, mother! would fall apart. Luckily, Aronofsky has crafted a masterful screenplay that works and plays on so many different levels. It's hard not to go into specifics on the story, as I'm trying to keep it as abstract as possible. I think people need to go into this film knowing practically nothing about what actually happens, other than the fact that it's entirely metaphorical. Just go in and take from it what you will, because it's a movie that will have a thousand different interpretations. 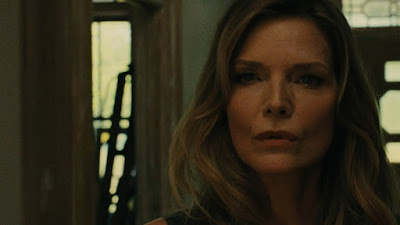 In terms of negatives, I have very few. I do think the marketing was entirely misleading. I criticized It Comes at Night heavily for their misleading marketing, so it would be hypocritical on my part to not comment on it here with mother!. But I do think there is a distinct difference between the two. With It Comes at Night, the movie I wanted was the one they advertised, and the one we actually got was an inferior and less interesting movie (you can read our full thoughts on that film here). With mother!, the movie being advertised looked conventional and cliched, but the film we actually got was so entirely unique and deeply compelling. That is a matter of opinion and taste, and I understand that. I can totally understand someone going into mother! excited because they saw the trailer and thought it was a typical horror movie, and then hating it because it wasn't what they paid for. I understand that, and I sympathize with those movie goers. That's why I had my preface in the beginning, warning movie goers that this isn't a straightforward movie. But to play devil's advocate, I don't know how you would market this film. It's not like you can have the trailer say in big letters "THIS IS A METAPHOR!". I'm under the impression that Aronofsky wasn't concerned about the movie's theatrical release, because this is a nearly impossible film to market. I think he wanted to just get it out into the world, and then it can live on in the years to come. I do believe mother! is the next Fight Club, in that it was mismarketed and misunderstood when it was in theaters, but years later people came to appreciate it for what it is. I see striking similarities between the two films, and I hope Fight Club's post-theaters revitalization will indeed happen to mother! when everything's all set and done.

Overall, mother! is the most important movie of the year. It takes a simple concept, but has it operate on a far higher, more allegorical level. The attention to detail, and the nature of this film's intricacy, is stunning. This is a thinking person's film, one that will leave you contemplating existence, religion, and the environment. This is an absolutely masterful piece of art from Darren Aronofsky. I have read reviews for this movie where people have called it "pretentious" or "heavy-handed", and I wholeheartedly disagree. This movie is an honest expression of internal rage, and it very clearly makes its point. I don't think it ever goes too far, or becomes repetitive. It is very deliberate in how it expresses itself. This is filmmaking on another level, and, as a lover of cinema, I relished in being able to experience this movie that really came out of nowhere. I can understand why people may have not liked it initially, because they were caught off guard by a film that was not marketed honestly. That's why I think, in a few years, mother! will live on like a Blade Runner or a Fight Club; a movie that was not appreciated fully when it was in theaters, but people have come to see how great it really is in retrospect. I do hope that happens, because I think this is a staggeringly brilliant film. I will be going to see this again, and I hopefully will post an editorial of my analysis of this movie. There's so much that I want to talk about, but I can't in this spoiler-free setting. If you haven't seen mother! yet, I implore you to go see it with an open mind. Just go and experience it. You may love it; you may hate it, but at least give it a chance. I know I personally was not expecting this to move me at all in the way that it did, and the same could certainly happen to you. Go give mother! a shot. 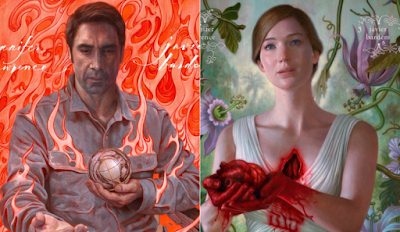 What do you think? Have you seen mother!? Did you like the film? Leave your (spoiler-free) thoughts in the comments section below.