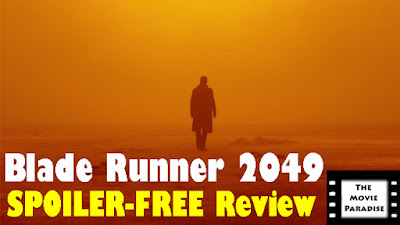 I watched the original Blade Runner for the first time when I was younger, and I didn't really like it. Maybe a lot of the deeper, more philosophical elements of the film, went over my head, but I thought it was rather dull. In preparation for this new movie, I rewatched the original, and I certainly enjoyed it more than when I had watched it the first time, but I still am not entirely on board with it. With the sequel coming out, I've always been on the fence about it. Like I said before, I didn't care for the original when I first watched it, so there wasn't a whole lot attracting me to this new one. You do have Denis Villeneuve directing, which does excite me. I didn't love his last film, Arrival, but I do think he is an incredibly talented director. So to see him tackle a Blade Runner sequel was an interesting prospect. Not only do you have Harrison Ford reprising his role, but you also have Ryan Gosling, who is just coming off of an Oscar nomination for La La Land. Rounding out the supporting cast is Jared Leto, Robin Wright, and Dave Bautista, which makes for a great ensemble. But probably what stood out to me the most from the trailer was the cinematography. Roger Deakins is one of my favorite DPs, and every single shot from the trailers has been breathtaking. It sounds strange to say, but that's what I was looking forward to seeing the most with this movie. And it didn't disappoint. Despite my issues with the original, Blade Runner 2049 is a remarkable film that's one of my favorites of the year!

Thirty years after the events of the first film, a new blade runner (Gosling) goes in search of the missing Rick Deckard (Ford). 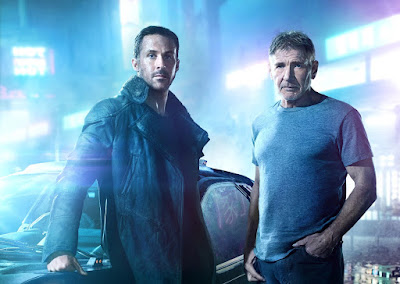 It's a testament to how great of a sequel a film is when it can entirely reshape the first movie, and make you think about it in a whole new light. While watching 2049, I began to think of Blade Runner in a whole new way, a way that made me appreciate the film more. We always talk about sequels detracting from the original movie, but here Denis Villeneuve made a sequel that actually enhanced the original. There is also a lot of added context and background information that puts this world into perspective, and gives more clarity to certain things that happened in the original. When you look at all the intricate puzzle pieces at play in 2049, it's a miracle that Villeneuve was able to put it all together and make a truly engaging film. While I love the set up and the world of the first movie, it was the story that I found hard to get immersed into. But that is not a problem with 2049 at all. I was riveted by this film, and captivated from the first frame. It does such a beautiful job of telling its story and fleshing out its characters. Ryan Gosling delivers a subtle but powerful performance, one that fills the screen. While the supporting cast doesn't get as much screen time as Gosling does, they do give great performances. Harrison Ford is at the top of his game with this movie, and especially shines in a gut-wrenching scene between him and Jared Leto.

This film is truly a visual spectacle. I'm not sure exactly what were practical effects and what was CGI, but the line between them was seamless. It was a perfect synthesis of the two. One of the most striking parts of the first Blade Runner was its production, costume, and set design. They took so many active steps to make it feel like a living, breathing world, and 2049 continues that undoubtedly. Blade Runner focused on a more dark, grungy atmosphere, and succeeded with that by keeping the variety in locations minimal. With 2049's greater digital capabilities, and larger budget, we're able to visit new and different places than we could in the original, but it never loses the Blade Runner feel. You absolutely believe it's all part of the same existing world. This movie looks gorgeous, from the color palette to the cinematography. Roger Deakens gives us some of the best cinematography of the year, and I believe he is the front runner to win at the Oscars. I think this film will be up for a number of technical awards in addition to cinematography, including editing, score, sound design, production design, and I do think it has a chance at some bigger awards, like Best Picture and Best Adapted Screenplay. It was incredibly well received, and it is a magnificent film. The Academy clearly likes Villenueve, considering Arrival's Oscar love last year. So I think 2049 has a shot at having a decent presence at the Oscars next year, but it all depends on what else comes out in the remaining months of 2017. In terms of negatives for this movie, I don't really have any. It could have had five to ten minutes shaved off, because its two hours and forty five minutes runtime felt a little too long. I also wish we got a little bit more of Harrison Ford, but I also think his absence from the film was a benefit to the story. So my negatives are either minimal or nonexistent. 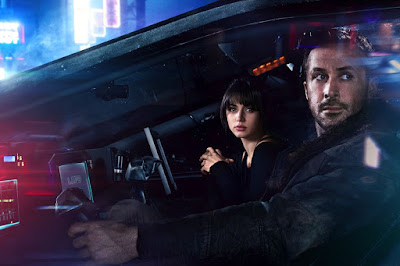 Overall, for a person who merely liked but did not love the original Blade Runner movie, Blade Runner 2049 is a surprisingly brilliant and satisfying sequel. It takes what works about the original, as well as its flaws, and overall improves upon both of them. The visuals, the sets and locations, and the overarching atmosphere, are all ameliorated. The story, the weakest part of the original in my opinion, is so rich and captivating here. Ryan Gosling gives a great performance, as does the supporting cast. Denis Villeneuve directs the hell of this movie, and shows once again that he's one of the best in the business right now. Roger Deakens gives us an impeccable looking film, and delivers on some of the best cinematography of the year. Watching 2049 helped me understand and appreciate Blade Runner even more, and makes me want to go back and watch it again. The fact that 2049 can expand and improve upon the original without compromising the integrity of it, or losing what made fans love the first one so much, is a Herculean feat on Villeneuve's part, and it's incredible to me that he was able to make the whole thing come together. In the end, I will be seeing Blade Runner 2049 again in theaters in order to really deconstruct and analyse it, but as it stands right now, this is one of my favorite films of the year. 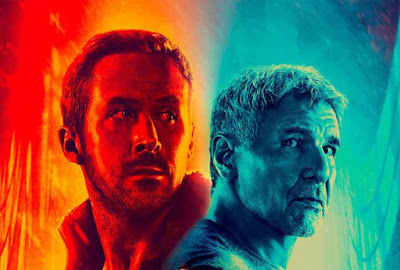 What do you think? Have you seen Blade Runner 2049? Did you like the film? Leave your (spoiler-free) thoughts in the comments section below.