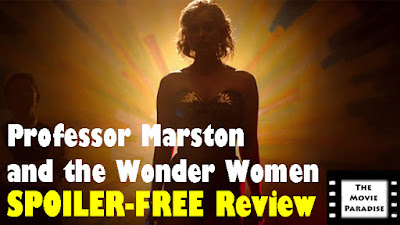 I've been interested in seeing Professor Marston and the Wonder Women for some time, though I was initially apprehensive. It tells the true story behind the creator of Wonder Woman, and his rather unique sexual and romantic relationships. With Wonder Woman having her feature film debut earlier this year (read our review here), I was afraid this movie was simply a cash grab in order to capitalize on the DC film's release. The litmus test for me came down to the rating. This is a story that requires an R rating in order to do it proper justice. If the rating was PG-13, then it was clear to me that this movie was only coming out to piggyback off of Wonder Woman's success. However, Professor Marston did receive an R rating, which made me incredibly interested to see it. It stars Luke Evans and Rebecca Hall, who are two of the best second tier actors working in the business today. They've never attained A-list status, but they have always turned in excellent performances. So with compelling source material, and talented actors, I was excited to see the film. And I wasn't disappointed. Professor Marston and the Wonder Woman is a fascinating look into the life of its lead character, backed by fantastic performances from Evans and Hall.

Professor Marston (Evans), the creator of the comic book character Wonder Woman, and his wife (Hall) both fall in love with one of his former students (Bella Heathcote), resulting in a polyamorous relationship. 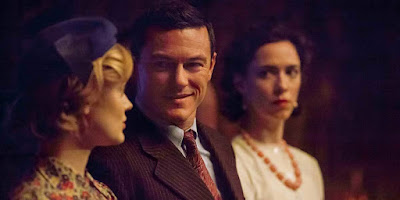 For the 1920-40's, this kind of lifestyle was seen as incredibly risque and provocative. Even today, though we have progressed a lot in terms of sexual acceptance, this sort of relationship would still be looked down upon. So the fact that it happened so long ago makes it all the more fascinating to see unfold on screen. One of this movie's strengths is that it doesn't paint any kind of lifestyle in an unrealistically positive light. This isn't a propaganda piece, trying to convince you to live a polyamorous life. It also doesn't trash it, making their relationship out to be a mockery. Rather, the point of the film is to show that William, Elizabeth, and Olive had was genuine love, portrayed beautifully through the use of the lie detector test. This isn't some kind of fetish, or something that could be easily dismissed by the general movie going audience. The three of them truly all love each other, and the film then turns the question over to you. If this is true love, then why should it be marginalized as being something lesser than the normal perception of love? That was the clear point this movie was making, and I respected it for it. It wasn't necessarily condoning it, nor was it discriminating against it. It simply displayed the lifestyle as it was, and showed that this was true, earnest love. Whatever you take away from that is your own thoughts and opinions, and I thought that was one truly remarkable element of this movie.

The other element that stood out was the performances. Luke Evans is great in this movie. He wholly inhabits this character, and he showed a wide range of emotion. I thought the direction Evans took the character in was great, and I enjoyed seeing him on screen. But the stand-out star of this film is undoubtedly Rebecca Hall. I think this is the best performance I have ever seen her give, and I thought she was amazing in The Prestige. She is arrogant yet sensitive, bold yet self conscious. There were so many contradictions to her character that it made you wonder who she really was, and it made her a character you couldn't quite understand. That was a deliberate choice by writer/director Angela Robinson, and it was brought to life excellently by Hall. She stole every scene she was in, and I couldn't get enough of her. Bella Heathcote was really good as well, but I think she was overshadowed by Evans and Hall. Even though she was an integral part of the story, the focus was more on William and Elizabeth, so it made sense that Evans and Hall's performances would be the standouts. 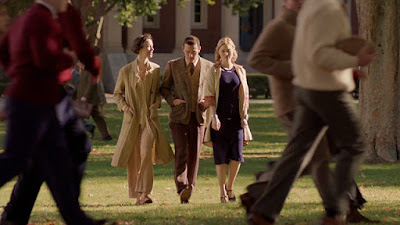 I do have a few negatives, however. The movie feels too long. It's only an hour and forty eight minutes, but it felt considerably longer than that when I was in the theater. This is mainly due to the pacing, which I think spent too much time focused on the first half of the story than the second half. The movie is essentially the formation of their relationship, and then sees how it plays out. So much time was spent on the set up that it began to get redundant, and it took away from what I thought were more important parts of the overall story that were in the second half. We don't get into Marston's creation of Wonder Woman until about three fourths of the way through the movie, and it felt a little cheap. I want to know more about that, since that is what he is remembered for, and that is mainly why I came to see the movie in the first place. Yes, Marston's personal life is fascinating to see and learn about, but I want to know more about its impact on the comic book character of Wonder Woman. They started to get into it, but I don't think they went as deep as they could have, or should have. There are also parts of their personal life that are glossed over, such as their kids. A promising aspect of the story is how a relationship like this would personally affect their children, and it was never really touched upon. Since so much time is spent in the beginning part, it feels like key things that I was wanting to see, or see more of, were cut out.

Overall, Professor Marston and the Wonder Women is a fascinating look at a lifestyle never really explored on film. It presents this in a way that isn't overly indulgent of it, neither is it dismissive. Rather, it shows it as being real love, and then lets you discern from that what you will. I thought it was a great way to handle this kind of subject material. The performances are also fantastic. Luke Evans shines in this movie, though he is upstaged by Rebecca Hall, who turns in the best performance I've seen from her. They have magnificent chemistry and great back-and-forth, and it made the film all the more entertaining. I do think the movie spends too much time on the first half of the story, which forces some key elements in the second half to be glossed over. The pacing makes it feel a lot longer than it really is, which began to get irritating. If less time had been given to the first half, and more time to the second half, then I think the film would have felt a little more well balanced. In the end, Professor Marston and the Wonder Women is certainly a movie to check out if you're interested in learning about where Wonder Woman comes from. Though it doesn't spend a ton of time on this, the insights it gives are fascinating in of themselves. 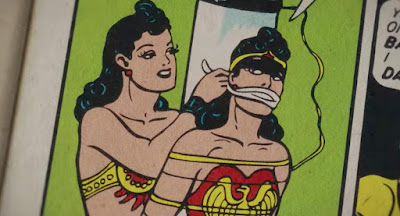 What do you think? Have you seen Professor Marston and the Wonder Women? Did you like the film? Leave your (spoiler-free) thoughts in the comments section below.