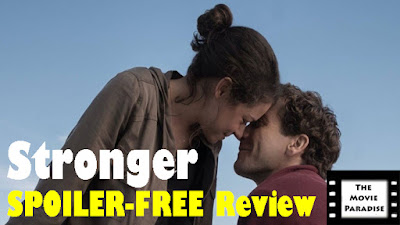 Stronger has been one of my most anticipated films of the Fall for a while. I remember when I first heard of this movie, I wasn't sure what to think about it. I had already seen Patriots Day, which did such a magnificent job in handling the Boston Marathon bombing. I didn't think there was really a need for another movie to tackle the same event. But the trailers for Stronger showed it to rather be handling the personal effects the incident had one on person, whereas Patriots Day simply covered the event in its entirety. And when you have such a rich story with Jake Gyllenhaal in the leading role, then you know you are in for something special. I was also excited to see Tatiana Maslany in a feature film role. She has crushed it on television with Orphan Black for years, but hasn't really transitioned into film yet, when she clearly has the talent to do so. So I've been excited to see what she would do in this film. My one real hesitation was that the film was being directed by Pineapple Express helmer David Gordon Green. I wasn't sure how he would be transitioning from comedy to a deeply emotional drama like this. Luckily, he pulled it off. Stronger is a very good film made great by powerhouse performances from Jake Gyllenhaal and Tatiana Maslany.

After losing his legs in the Boston Marathon bombing, Jeff Bauman (Gyllenhaal) tries to get his life to back to normal. 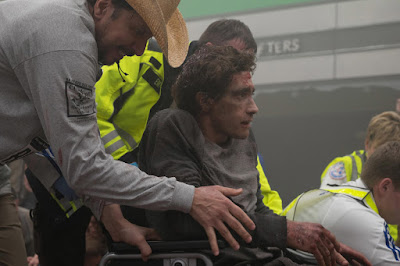 If we're strictly comparing this to Patriots Day, it's not as good. I think Patriots Day overall is a stronger film. However, that does not take away from just how good Stronger actually is. It's a very well told narrative, enhanced by rich performances from Jake Gyllenhaal and Tatiana Maslany. Gyllenhaal has been one of my favorite actors for years now. Every time he is in a movie, he turns in an absolutely brilliant performance, and Stronger is no exception. From the opening scene, I didn't see Gyllenhaal on screen; all I saw was Jeff Bauman. He is a chameleon of an actor, and he transformed once again for this film. His performance is rather subtle for most of the movie, but he has certain scenes where he bursts with emotional outbreaks, and it's truly commendable acting. Playing off of him was Tatiana Maslany. I know she's a brilliant actor from her work on Orphan Black, and I was happy to see her on the big screen. I don't think she was as good as Gyllenhaal was, but one of her strengths in the film was not stealing the spotlight. The story is about Gyllenhaal's character first and foremost. She has a very important role, but she is not the focus of the story. And Maslany knew that. She certainly had her scenes where she showed what she could do, but all of her acting was in service to keeping the focus on Gyllenhaal, making it a rather mature performance. As for the direction, I thought it was adequate. There was nothing about this movie's direction that stood out to make me think that David Gordon Green has all of this bubbling potential to become a brilliant dramatic director. It could've gone a lot worse, but he turned in a good movie. So there is something to be said about that.

While the performances were fantastic, I don't think the film as a whole matched it. It's a rather traditional narrative, one we've seen many times before. It's hard to blame the filmmakers for that, since it's based off of true events; you're not sure how much of what they told actually happened, and what was Hollywood inspired. Regardless, the storytelling felt rather conventional. It also felt like all the pieces were in the right place, but the true emotion of the story wasn't given enough space to breathe. It felt like a lot of the emotional depths of the film were being restrained a bit, and it didn't fully let go. That's more of an issue with the screenplay than with the performances, because Gyllenhaal and Maslany shined in the scenes they were able to explore their characters. It just didn't go to all the places I would have liked to have seen them go. There were also instances where reality was suspended for the sake of a joke. It only happened a couple of times, but a character said or did something that was not realistic or plausible at all, simply for a joke to be made. That felt like David Gordon Green's comedic roots seeping in a little bit. There are jokes in the film that certainly work, and there are some really funny parts. It's more the fact that they, for these select scenes, went so far out of their way to tell these jokes that it did not come across as something that would genuinely happen in real life. 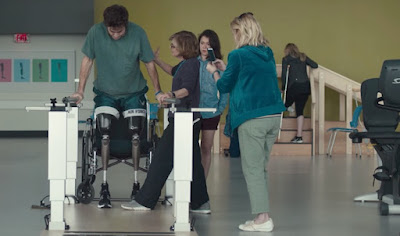 Overall, Stronger is a good film made great by its performances. Jake Gyllenhaal is once again incredible, and turns in another grade-A performance. He completely transforms himself for the role, and is practically unrecognizable, personality wise. Tatiana Maslany is also great, but she's careful to never let the spotlight leave Gyllenhaal. Everything she does in the movie is in service to the story, which is focused on Jeff Bauman. There are some truly powerful scenes and moments that came close to bringing me to tears. However, I do think a lot of the emotional potential of the film was held back by the screenplay. It's a good script, but it was sort of conventional, and it felt a little restrained. I thought there were greater depths the movie could've gone to to truly explore the mindset of this character. There were a lot of things touched upon, but there was also a lot more meat to it that the film overlooked. There were also parts where the realistic integrity of the film was compromised simply to make a joke, and that was distracting. In the end, Stronger is a movie I'm definitely glad I saw, and I enjoyed a lot. However, without Jake Gyllenhaal and Tatiana Maslany in their respective roles, I don't think Stronger would be nearly as effective as it is. 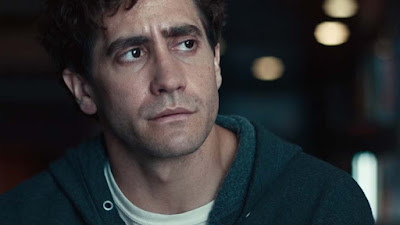 What do you think? Have you seen Stronger? Did you like the film? Leave your (spoiler-free) thoughts in the comments section below.