More so than world peace or a cure for cancer, people have been waiting for the first trailer for Avengers: Infinity War. It is the biggest comic book movie since the original Avengers film, bringing together practically every single hero put to screen in the Marvel Cinematic Universe. I have been patiently waiting for this movie to come out for years now, and I trust the Russo Brothers will give us an absolutely incredible film. They did a magnificent job with Captain America: The Winter Soldier, and somehow topped themselves with Captain America: Civil War. A lot rides on Infinity War to be the greatest movie Marvel has ever made, and if anyone can pull it off, it's the Russo Brothers. The trailer for Infinity War first screened during San Diego Comic Con this year, to which it received fantastic praise. And since then, us regular fans have been waiting for it be released to the public. We thought it would come with Thor: Ragnarok, but it didn't. A few Vanity Fair covers were revealed online, teasing the movie. You can check them out for yourself here. But this signaled that maybe the trailer would be released soon after and, sure enough, the first trailer for Avengers: Infinity War dropped online today.

This trailer was incredible! I loved how it began with Samuel L. Jackson's classic speech from the first Avengers, but said by everyone else. It had a touch of nostalgia, while also showing that this is going to be a different movie from what we've seen before. There's a lot of great shots in this trailer. You have Vision (Paul Bettany) without his make-up! So is he human now or something? That was a shock when I saw it. Spider-Man (Tom Holland) is officially in his new suit, which I hope he's not in the whole time. I think he'll be in his regular suit for the beginning, but once it gets to the space stuff that's when he'll dawn this new suit. We get a decent amount of Thanos (Josh Brolin) here. I thought Brolin's voice fit perfectly for the character, and his CGI work looked fantastic. In fact, all the CGI in this trailer looks spectacular, for a film that's still six months out. Especially after Thor: Ragnarok, I was afraid the CGI would be pretty noticeable, but in this trailer it all looked great. The "Get this man his shield" line made me smile, and I loved Scarlet Witch's (Elizabeth Olsen) reaction to seeing Captain America (Chris Evans). The scale of the battle near the end really surprised me. It looks like a The Lord of the Rings-level battle. Are they on Earth? It looks like Earth terrain, but I can't imagine Avengers: Infinity War taking place entirely on Earth, so it must be some other planet. But on second thought, it could be Wakanda. And, of course, we get the Guardians of the Galaxy at the very end. I kind of wish they were in the whole trailer, but it was still cool to see them at the end nonetheless. Overall, this was a great trailer. They hammered in the union of all these heroes, especially heroes who haven't been with the Avengers yet, like Doctor Strange (Benedict Cumberbatch). This was satisfying end to the months of anticipation for a trailer, and now I can't wait for the next one! 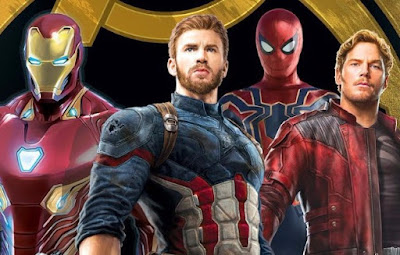 What do you think? Did you like the first trailer for Avengers: Infinity War? Are you looking forward to seeing the film? Leave your thoughts in the comments section below.