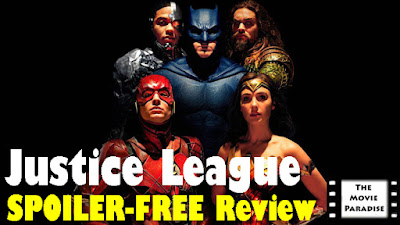 For the past few weeks, I have been of the unpopular opinion that Justice League would suck. With Zack Snyder stepping aside due to a personal tragedy, and Joss Whedon coming in to finish the job, I didn't know how two directors with very distinct styles could blend together for one movie. It just didn't make sense to me. It faced an uphill battle, due to the poor reception of the previous movies. The DC Cinematic Universe hasn't had a great track record so far. You can see how I rank the movies here. So add on top of that the extensive (and expensive) reshoots the fix the movie, and it didn't seem like there was any way Justice League could be great. After I made that prediction, reviews came out for the film that proved the film doesn't suck in the way that I thought it would, but it's not as great as fans were hoping it would be. This gave me some encouragement, but it didn't necessarily excite me. I always hope that a movie will be awesome, but whether I think it actually will be or not is another story entirely. So I went into Justice League expecting it to not be that good, but hopeful that maybe it would surprise me. And yet I still found myself underwhelmed. While it's not necessarily a bad movie, Justice League fails to make you care at all about what is happening on screen.

In the wake of Superman's (Henry Cavill) death, the Justice League must band together in order to fight off an impending galactic threat. 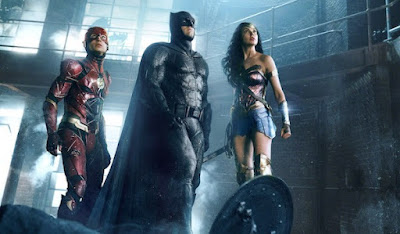 If I were to never have seen Justice League, I don't think I would have missed anything. It lacks any real sense of suspense or any kind of emotional stakes. They keep saying over and over about how Steppenwolf (Ciarán Hinds) is going to destroy the world and everything will be lost, but I don't feel it. Justice League uses a lot of blatant explanation and exposition in order to try to make you care for these characters and their quest, but it doesn't work. I feel entirely indifferent to what is happening on screen. I don't hate what is happening; I just don't care about it at all. The film certainly feels like it has undergone extensive reshoots. For the first thirty minutes or so, the movie just moves scene to scene to scene. There is no real connective tissue bringing these scenes together; they all just happen one after another. I think this is where Joss Whedon tried to reshape a lot of the movie, and the result is a start-stop jagged feel that breaks any sort of investment I have each time the movie abruptly decides to move on to something else. It feels like there's a lot more to the story that has either been cut out, or reshot to maneuver around, and it makes it all feel superficial. Because so much work has gone into reshaping and reworking this movie, nothing actually feels authentic. I am not immersed in the story, because the story is a Franksteined-together collection of two visions. I do wish the movie was longer. At two hours, there's barely enough time to introduce all the characters, establish the conflict, and have it all come to a satisfying conclusion. The early development is rushed. It doesn't take long for the team to come together, and it is all far too convenient. The introductions of the Flash (Ezra Miller), and Aquaman (Jason Momoa) are too quick, and I'm not able to properly understand them as characters so that I could then get behind them when the action goes down.

A lot more time was needed to fix the special effects. There are shots where it was clear that they had been done during reshoots, just because of how poor quality the green screen blending is. It constantly took me out of the film. While I like what they do with the character, Cyborg's (Ray Fisher) suit needs a lot more time to properly animate. It's a concern I've had ever since the first trailer dropped, and it still has not been fixed. The other shots and scenes with poor CGI aren't as bad, since they were fleeting. But Cyborg is a character who you're looking at for most of the movie, so it becomes distracting with him looking so obviously fake. Steppenwolf also looks pretty bad. He looks like a video game villain rather than a movie villain. He has shades of Azog from The Hobbit movies. There is also no substance or depth to his character, and it makes him just a babbling CGI monster who runs around swinging his ax at stuff. He is just a bad villain; not cringe-inducing like Jesse Eisenberg's Lex Luthor was, but still a very poor antagonist. Superman's return was also massively disappointing. I won't go into details as to when or how he comes back, but there was no reason to hide it from the trailers. By keeping him out of the trailers, it made it seem like Superman's return would be some sort of huge, monumental moment that the audience could rally behind. But his return just kind of happens and we move on from it. It should have been a far more cinematic moment, something to justify his death in Batman v. Superman: Dawn of Justice. But instead, it just makes me question why they killed Superman in the first place, as it seemingly had no real purpose other than to simply happen. 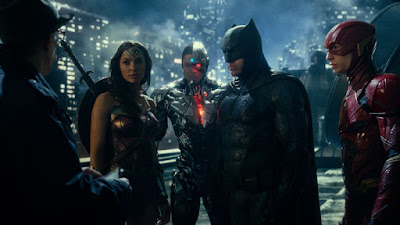 95% of the comedy in Justice League fails for me. It honestly feels like DC is trying to imitate what Marvel is doing, and it just doesn't work here. It doesn't feel natural to have Batman cracking one-liners in the same fashion as Tony Stark does. The Flash tries to be the comedic relief, but he only ends up coming across as a weirdo. I've tried to find a better word to use, but that's the only one that comes to mind. But I think his character is only mishandled, not ruined. In the hands of another director, in another movie, I think the Flash could be a fantastic character. But here, in this movie, his comedy just feels forced. I don't need my DC movies to be funny. When the scene calls for it, I'm all for a joke here and there. But starting your script thinking "Okay, I have to put more jokes in here" only leads to incredibly forced and contrived comedy, and that never works. The problems with Man of Steel and Batman v. Superman aren't that they were serious. Being serious doesn't innately make a movie bad. I think DC took away the wrong things from Batman v. Superman, and are just trying to make their movies Marvel movies when they don't have to be. What can make DC films unique and different is them having more serious stories, and more mature themes. There can be jokes in there, yes, but not shoe-horned in to fit some sort of quota. Nothing about the comedy in this movie feels organic; it was all forced. I hope they can either find a way to have comedy in their movies without trying to copy Marvel, or they can find their own tone that makes them stand out in their own right.

There are some positives. All the design work is great. I am always taken by Batman's (Ben Affleck) suit design every time I see it. It's easily the best Batsuit ever put to screen. The costume work for the Flash, Aquaman, and Cyborg are also great. While it's brief, we get another look at Gotham City, and it is incredibly representative of the Gotham from the comics. It has a dirty, dingy, otherworldly feel to it that, though only there for a couple of scenes, the movie captured quite well. We also get a brief glimpse at Atlantis, and it is beautifully designed as well. While I was watching the Atlantis sequence, it only made me more excited to see James Wan's movie, due out next year. J.K. Simmons is only on screen for like three minutes, but he's fantastic as Commissioner Gordon. He captures the character perfectly, and nails his dynamic with Batman. It feels like there is a history there, so much under the surface that isn't being talked about, and that's perfect for a weathered Batman and Commissioner Gordon. I also really like the direction they take Cyborg's character. While the CGI is distracting, he is given a lot of emotional depth that Ray Fisher handles beautifully. It gives the character a richness in the first half of the movie that I really appreciate. It's kind of lost once we get into the main battle of the movie, but I still really like the development of the character. It makes me a lot more interested in seeing his solo film, which is funny; I always felt like he would be a throwaway character in this movie, and he ends up being the most developed. There are also some specific scenes in the film that I think are great in of themselves. The bank scene involving Wonder Woman (Gal Gadot). There are a few conversations between Diana and Bruce that are absolutely riveting, because of the performances from Gadot and Affleck. There are little spots in here that helped outweigh a lot of the other stuff that I didn't exactly care for. 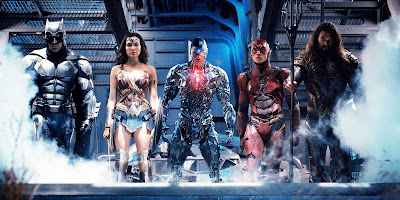 Overall, if I had to watch either Batman v. Superman: Dawn of Justice or Justice League again, I think I would pick Batman v. Superman. While there are parts of Batman v. Superman that I absolutely hate, and I can't exactly say there are any specific parts of Justice League that I genuinely hate, the good in Batman v. Superman is better than the good in Justice League. While there are some really good characterizations, some excellent production and costume design, and some incredible isolated sequences, Justice League lacks any kind of real emotional stakes. It feels shallow. The reshoots tried to salvage the movie and, had they had more time, perhaps it could have saved it. But Justice League feels like a disjointed mess, rushed to meet a two hour runtime requirement. It certainly feels like its been through multiple hands, all tweaking it to try to fix it. But the end result doesn't feel like an organic movie. The CGI also needed a significant amount of work. The film tries to strike a new tone, closer to that of Marvel movies, but it fails to distinguish itself. This is not necessarily a bad movie; I'm just indifferent to what is happening on screen. In the end, Justice League was an okay time at the theaters, but I never intend on seeing it again. 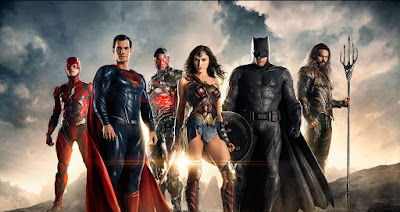 What do you think? Have you seen Justice League? If not, are you planning on seeing it? Leave your (spoiler-free) thoughts in the comments section below.