I know not everyone was a fan of Jurassic World, but I enjoyed it quite a bit. I thought it was a perfect realization of what an actual dinosaur theme park would look like, and I found the world-building on Colin Trevorrow's part to be genius. The film does have its flaws, but Jurassic World was a fun and smart return to the Jurassic Park franchise for me. So, naturally, I've been looking forward to next year's Jurassic World: Fallen Kingdom. It reunites Chris Pratt and Bryce Dallas Howard, but this time is being directed by J.A. Bayona. Bayona's last film, A Monster Calls, was incredibly underrated, and it displayed a lot of the creativity I want from someone directing a Jurassic Park movie. So I've been very interested in seeing what Bayona would do with the sequel. With it hitting theaters next summer, we're getting to the point when we should have a first trailer. And, sure enough, the first trailer for Jurassic World: Fallen Kingdom dropped today.

I thought the trailer was good, but not great. We have heard this before, but it definitely seems they're going in a darker direction with this sequel. I think that's a good idea, as long as it doesn't lose the fun and imagination of the original. It has to have that to some degree, even if the story surrounding it is darker. Chris Pratt's character seems to have matured and grown since the last movie, which could give us an interesting opportunity to see some more of Pratt's dramatic acting chops. He pulls of comedy and action spectacularly, but I really want to get a better sense from him on whether he can deliver on the drama. I like the story for this new movie; I think it could be an fascinating concept. However, from the looks of this trailer, I don't know how it can last an entire movie. It looks like it could wrap itself up in about a half hour. Now, I'm sure that we don't have all the facts. I'm sure there is a lot more going on narrative-wise than what it looks like on the surface. But, just from the trailer I saw, it doesn't seem like it could last the full two hours. Regardless, I thought this was a solid first trailer, and I'm excited to see the film this summer. 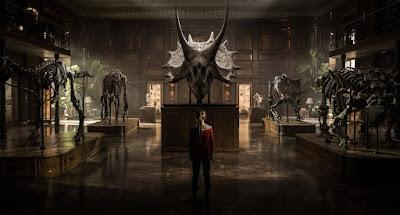 What do you think? Did you like the first trailer for Jurassic World: Fallen Kingdom? Are you looking forward to seeing the film? Leave your thoughts in the comments section below.