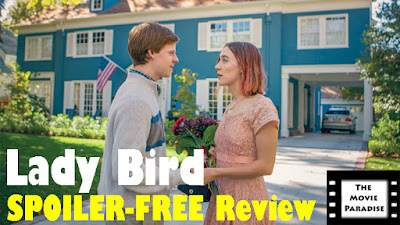 With us being in the heat of Oscar season right now, it being the beginning of December, I have been hearing one resounding film referred to as a certainty for next year's Academy Awards: Lady Bird. The movie has received nonstop praise, and even recently became the best reviewed film on Rotten Tomatoes. Critics have been relentlessly raving about this movie, so it certainly sparked my interest. I've been excited about checking out Lady Bird for a while now. The trailer made it look like an average coming-of-age story, so I was curious to see what was so special about this movie, what this film did differently, for it to receive such praise and accolades. In actuality, it doesn't do anything radically different, and yet it still deserves every single praise and accolade it has gotten. Lady Bird is simply a really good movie, and in its simplicity, it excels.

A coming-of-age story about Christine McPherson (Saoirse Ronan), who refers to herself as "Lady Bird", as she navigates trying to please her mother (Laurie Metcalf) and applying for colleges. 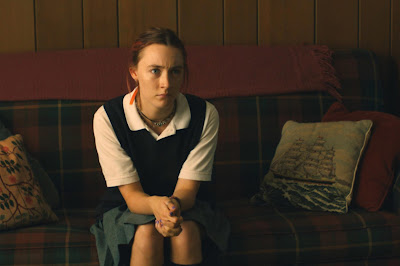 Does this movie follow the same formula that every other coming-of-age film follows? Yes, it does. But what makes Lady Bird so special is the performances across-the-board, and the writing and direction by Greta Gerwig. Saoirse Ronan is a force to be reckoned with. She is only 23 years old, and is already a two-time Academy Award nominee. And I do think there is a strong chance that she'll gain a third nomination for her role in this film. Ronan brings such humanity and energy to this character. She's quirky and out there, but not just for the sake of being so. It works for the character, and Ronan plays it so well. I guarantee you; she is an actor who will be around for a very long time, and this movie reaffirms that for me. Laurie Metcalf is also fantastic as the mother. She has a great dynamic with Lady Bird that gives the movie so much of its conflict, as well as its heart. Manchester by the Sea's Lucas Hedges has an important role in this film, and he's great. He isn't as good as he was in his aforementioned Oscar-nominated role, but he adds a lot to Lady Bird, and has fantastic chemistry with Ronan. Rounding out the supporting cast is Beanie Feldstein and Odeya Rush, who both have vital and unexpected parts in the story. The performances by both actors are also really good. This is truly an ensemble film, led powerfully by Saoirse Ronan.

Greta Gerwig does a fantastic job helming this movie. It's a very cleverly written film, in that it's not afraid to lean towards some classic movie tropes associated with coming-of-age films; however, it doesn't overuse them, nor feel overly sappy. Rather, Gerwig does such a good job of rounding out these characters and making them feel real that it doesn't seem formulaic-- it just seems like real life. A part of the credit certainly does go to the actors, but it begins with the writing, and Gerwig absolutely delivers on that front. Something I really appreciate about Lady Bird is that it doesn't ever feel like it's trying to be an Oscar's darling, or an Academy front runner. It genuinely feels like Gerwig simply made a good movie, and it's being recognized for that. There's something about that kind of purity and wholesomeness that makes me love the film even more. While I certainly love many of the "Oscar bait" movies, this isn't trying to be that, and I appreciate it even more on that level. So sure, the cinematography isn't mindblowing. It doesn't have a jaw-dropping score. The costume design doesn't blow anyone's socks off. But as a whole, Lady Bird is just a great movie, and you need to have those every once in a while. I don't have very many negatives. Stephen Henderson is a supporting actor who appears in a lot of movies, and I always loves when he shows up on screen. He has a role in this film, and he is great for the first few scenes he's in. Then, they seemingly take his character in a certain direction, and then he just disappears from the movie all of a sudden, without any explanation. That could have been fixed. The film is also about five minutes too long. Granted, it's only five minutes, but I do think a few moments could have been shaved off in order to make it a tiny bit leaner. But those are really my only problems with the movie. 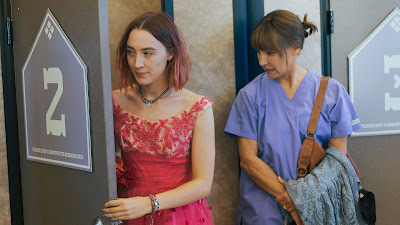 Overall, Lady Bird is one of a few films each year that I can say is a movie that I fell in love with. It's a strange way to refer to a movie, and I have no better way to articulate that sentiment, but it's how I feel. I felt the same way about La La Land last year. Lady Bird may seem like a basic, formulaic coming-of-age comedy/drama, but the deeply personal and beautiful writing by Greta Gerwig, paired with fantastic performances across the board, make for something truly special. Saoirse Ronan is excellent as the lead. She is so effortless in her excellence as well, proving to me that she is going to be a prominent name in the industry for years to come. The most powerful dynamic in the film is her relationship with her mother. It isn't one-sided, but rather has many different dimensions that make it all the more rich and captivating. Saoirse Ronan has great chemistry with every other actor in the film, which made simple scenes riveting to watch. The comedy is also used in the movie effectively. It's a very funny movie, but it's not a comedy per say, which I appreciated as it allows the film to get darker and more serious when it needs to. Gerwig does an excellent job writing and directing this movie, and guides it into being far more than just an average coming-of-age movie. In the end, Lady Bird isn't a remarkable piece of astonishing filmmaking. It won't be analyzed by film scholars for endless ages. What it is is simple a great movie, one of the best films of the year even, and is certainly worth seeing. 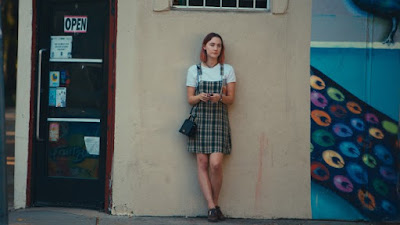 What do you think? Have you seen Lady Bird? If not, are you planning on seeing it? Leave your (spoiler-free) thoughts in the comments section below.