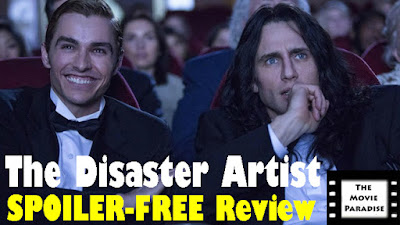 Along with The Shape of Water, The Disaster Artist has been my most anticipated film of December for awhile now... yes, even more so than Star Wars Episode VIII: The Last Jedi! The Room really is the "Citizen Kane of bad movies". It is so incredibly funny because of just how bad it is, and it's a classic in its own right. So when you have James Franco telling the story of how that movie was made, how can you not be excited? I went into The Disaster Artist with mammoth expectations. I was looking for a brilliant performance from Franco as Tommy Wiseau, the pioneer behind The Room. I was looking for a great comedy with strong dramatic moments as well. With all the hype behind it, I was looking for an Oscar contender. And while I do think it will be up for some awards, I wouldn't necessarily say that it is one of the top movies of they year. Nonetheless, The Disaster Artist is hilarious, and James Franco gives probably the best performance of his career.

When they can't get work as actors anywhere else, Tommy (James Franco) and Greg (Dave Franco) decide to make their own movie, which infamously became The Room. 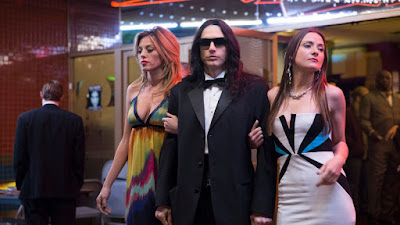 James Franco absolutely crushes it as Tommy Wiseau. He captures every single oddball idiosyncrasy the man has to offer, and Franco encapsulates it all perfectly. From the first second we are introduced to him, it is clear that Franco isn't just doing a Tommy Wiseau impression; he has completely become him. That was one of my fears going into the film, that we would simply be watching Franco play Wiseau. But instead, all I saw on screen was Tommy Wiseau. He gives the film so much of its comedy, as well as its emotional core-- and it all stems from Franco's performance. That is absolutely an accomplishment on Franco's part, and he is deserving of an Oscar nomination for it in my eyes. Dave Franco is really good in the movie, though he didn't lose himself in the character of Greg Sestero quite like his brother did with Tommy. I could mostly see Dave Franco in the role, but that doesn't take away from him being as solid of a lead as he is. One of my favorite characters, second only to Tommy, is Seth Rogen as The Room script supervisor, Sandy Schklair. He captures the despondency of the role perfectly, and it makes for some great comedic moments. He's the most relatable character in the film, I find, simply because what he says and does is exactly how I would react to what was happening during the shoot. All of the performances are great, and there are some fun surprise cameos sprinkled throughout, but the true stars of the film are James Franco and Seth Rogen.

If this movie was all laughs, then I don't think it would have nearly the same amount of staying power that it does have. The heart of the film is the relationship between Tommy and Greg, and it is perfectly realized. Their comradery, as well as when they butt heads, makes for a deeply personal and authentic dynamic that defines the movie. I can understand why they cast the Franco brothers in these roles, because their innate chemistry is what sells the film. You also get to see the tragedy of Tommy Wiseau shown on screen. While some of his rather unique antics are played for laughs, you get a really strong understanding of how deeply sad of a character he truly is. Nobody takes him seriously; nobody believes in him. Everyone thinks he's a joke. There's a moment with Tommy after the premiere of The Room that is so devastating and heartbreaking, and it only works because of how well the character is written and the excellence in James Franco's performance. But this film also makes you redefine your own understanding of what success is. Everyone makes a complete mockery of Wiseau's film, and yet it has gained its own cult following. It has found far more success and popularity as a bad movie than it ever would have had it actually been good. So was The Room, in its own way, a success? The Disaster Artist tackles some of these questions, and lets you decide for yourself.

There are some important parts of the story that I found the film to gloss over. While what the movie does decide to focus on is very important, there are other integral parts that they skim over in order to move the story along, and I wish they hadn't done this. I wanted all the different elements to be equally fleshed out. We meet a lot of different people who were involved in the making of The Room, but a lot of them are just there. We don't actually get to know any of these characters. I can see why Franco chose not to focus on them, since Wiseau isolated himself and Greg from the other cast and crew in real life. But for the purpose of the film, I would have liked to have seen these other characters developed a little bit more, so that they would feel more like actual people. However, the very end is the biggest missed mark for me. They don't go into a lot of details on Tommy's life after The Room takes off, at least not following James Franco as the character. I wish they had shown us on screen Tommy and Greg's lives after the release of the movie, instead of ending it where they did. I wanted some sort of resolution for these characters, but instead they abruptly ended the movie in the wrong place to do so. But in terms of how good the film is as a whole, these issues are rather minute.

Overall, The Disaster Artist is a hilarious comedy that gives you fantastic insight into the making of the best bad movie in Hollywood history. James Franco gives an award-worthy performance as Tommy Wiseau. He completely becomes the character, losing himself in the role. While all the performances in the movie are really good, the other stand out has to be Seth Rogen. He gets some of the biggest laughs, and plays the cynical script supervisor role excellently. The dynamic between Tommy and Greg is very well realized, and is the emotional core of the movie. The film also explores the tragedy of Tommy Wiseau, and begs the question whether The Room is actually a success. These larger themes and concepts give the film an extra layer of meaning that elevates it from just being a dumb comedy. However, the movie does gloss over a few key parts that I wanted to see more of, especially concerning certain supporting characters. The film also ends too early for my liking, as I wanted to follow Franco's Wiseau and see the impact the success(?) of The Room had on him. But, in the end, The Disaster Artist is a worthy comedy, and a must-see for anyone who is a fan of The Room in all of its awful silliness. 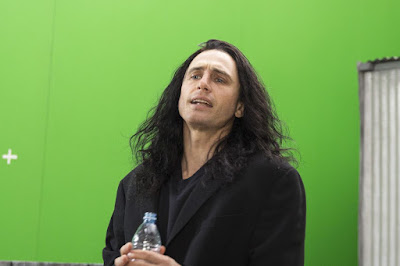 What do you think? Have you seen The Disaster Artist? If not, are you planning on seeing it? Leave your (spoiler-free) thoughts in the comments section below.