The Shape of Water SPOILER-FREE Review 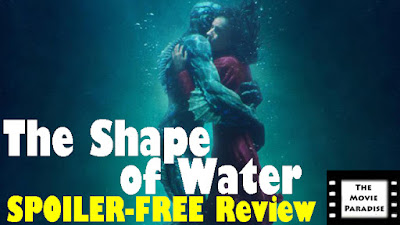 The Shape of Water has been one of my most anticipated films of the year. Guillermo del Toro is a brilliant director, one who turns in, if nothing else, visually stunning work. I was in the minority for really liking his last outing, Crimson Peak. So I've been excited for The Shape of Water from the beginning, but then my anticipation took a different turn. It began not just being nominated, but winning all sorts of awards circuits, including gaining major Oscar buzz. And now, not only is it a lock to garner a whole bunch of nominations, but it's actually the front-runner to win several categories, including Best Picture. With all of this added hype, my excitement for this film has gone through the roof. So I have anxiously been awaiting my chance to go see the movie, and it's finally happened. While I definitely like the movie a lot, The Shape of Water isn't one of my top movies of the year like I was expecting it to be. But it is still a great movie nonetheless.

A mute janitor (Sally Hawkins) at a research facility in the 1960's forms a relationship with a captive aquatic creature (Doug Jones). 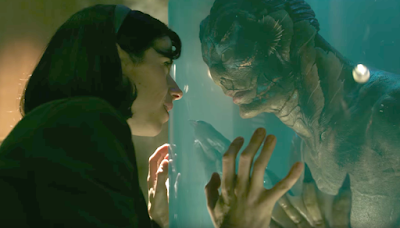 One of the most impressive parts of The Shape of Water will probably go unstated by many, because it is easy to overlook. It is stunning how much chemistry a woman who never talks and a fish monster can have. The energy between them radiates, and I had to keep stopping myself to consciously think about what a feat that truly is. As a direct result to how great the writing, directing, and performances are, this relationship between a woman and a monster never feels strange. If done by lesser talent, this could have come across as very weird or wrong. But del Toro crafts this film in such a way that it never comes across in this manner. In fact, in feels only natural, and that is applause-worthy on his part. That is the single biggest thing that Del Toro needed to pull off flawlessly, and he rises to meet the challenge. The performances are all great. Sally Hawkins is phenomenal, being able to communicate so much without ever talking. Her role requires a great deal of physical acting, with a certain reliance on it, and Hawkins pulls it off magnificently. Michael Shannon is terrifying as the villain. His character isn't given as much depth as I would have like (which I'll go into more later), but Shannon plays the part perfectly. He is electrifying every time he is on screen. Richard Jenkins is also great in his supporting role. I do wish they had given his character a little bit more to do, but he is entertaining every time he is on screen. And Doug Jones is great as the Amphibian Man. It's surprising how much emotion he is able to convey through his heavy prosthetics and make-up. This is a really strong ensemble film, and the movie certainly benefits from it.

As with every Guillermo del Toro movie, the production elements are all spectacular. Del Toro really has a great understanding of mise-en-scène, something I'm continuously taken aback by every time I watch a movie of his. His cinematography isn't usually something that lunges out at you and calls attention to itself; rather, it works to very subtly draw you into the film. I do very much like cinematography that stands out and pops, but there is also something to be said for more the subtle kind of shooting a film. Del Toro has a strong hold on his production design. From the set design to the costume design to the color palette, every del Toro movie has a clear direction that is unique to its own story, and this film is no exception. Nothing is left to chance in terms of prop placement or aesthetic design. It is all meticulously and intricately crafted. Del Toro is a very visually-driven director, and that is an aspect of him that I always appreciate. The visuals in The Shape of Water really work to tell their own story, while simultaneously enhancing the overall narrative. That is not something every filmmaker can do, but del Toro pulls it off in spades. 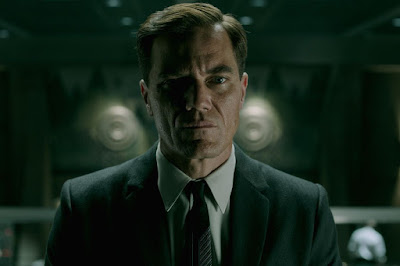 While Michael Shannon gives an excellent performance, I wish his character had been more fully developed. They attempt to show a more human side of him by introducing his family and wife, but this doesn't do much to round him out as a character. He is very much the evil guy, but we never see any other sides to him. It would have really brought his character home had he been more multifaceted. I also wish Richard Jenkins' character had been given more to do. They set up a really interesting side story for him, one that I was intrigued in seeing where it went. However, it kind of dissipates as it merges with the main storyline, and it never truly pays off. So what could have been a fascinating subplot that enhances the main story ends up feeling like a detour more than anything else. I just wish this was handled a little bit better in order to make the film all come together in the end. The Shape of Water does have some pacing issues, and feels a little bit too long. I think ten to fifteen minutes could have been shaven off in order to make it a leaner cut. And the film does drag a bit from time to time. While the movie would have been better had these issues been rectified, they don't necessarily bring the film as a whole down that much for me. The movie just would have been all the more effective had these issues not been present.

Overall, The Shape of Water is a really good film, and a satisfying one from Guillermo del Toro. I was hoping for it to end up being one of my very top favorite movies of the year, which it didn't, but I enjoyed it nonetheless. The performances across the board are great. Sally Hawkins and Michael Shannon are the stand-outs in terms of what they convey through their performances. Doug Jones' role as the Amphibious Man also cannot go unstated, and the level of nuance he is able to express through his bodysuit. The chemistry between Hawkins and Jones is incredible, and it's a fantastic accomplishment on the film's part to make that aspect of the movie work. For lesser filmmakers, it could have crashed and burned, but del Toro pulls it off magnificently. The production elements are all excellent, carrying the signature beautiful visuals that one comes to expect from a Guillermo del Toro movie. I do wish Michael Shannon's character was better fleshed out, and that Richard Jenkins was given more to do in the film. I also found the movie had some pacing issues, and could have been a little bit shorter. But in the end, The Shape of Water is a really good film that will most likely end up in my top ten list of my favorite movies of the year. 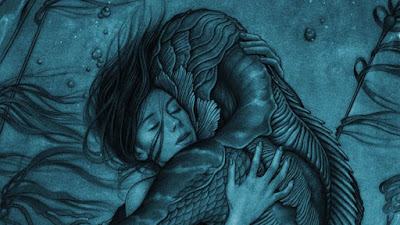 What do you think? Have you seen The Shape of Water? If not, are you planning on seeing it? Leave your (spoiler-free) thoughts in the comments section below.