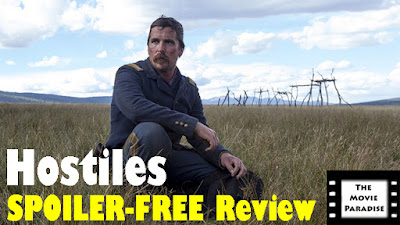 
Hostiles centers around Captain Joseph Blocker (Christian Bale), a hardened American soldier who absolutely despises Native Americans. He says that he has seen enough savagery from them to surmise that all Native Americans are lawless mass-killers. However, when his superior (Stephan Lang) orders him to oversee the safe travel of the dying Chief Yellow Hawk (Wes Studi) to his rightful land, Joe must come to grips with his own prejudice. With his fourth directorial effort, Scott Cooper crafts a fascinating look at when the falsehoods a man believes crumbles right before his eyes. How does one adapt when something they've believed their entire lives is entirely dismantled? While the second act does have some dry patches, Hostiles is an interesting character study, backed by a great performance from Christian Bale, even if the film does struggle with its pace. 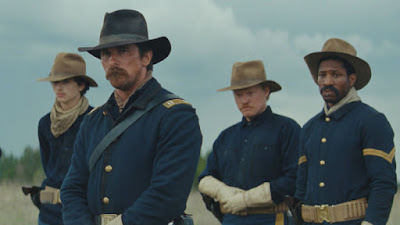 When we first meet Bale as Joe, he is dead set in his beliefs. He doesn't view himself as ignorant nor prejudice, but rather as a methodical military man only reacting to what he has witnessed. For the beginning act, the film struggles to divorce itself from Joe's ideology. It runs the risk of devolving into an unfortunate Western from Hollywood's past, where the heroic whites face off against the savage Indians. And with so much progress done in our society to educate people of just how backwards that mentality is, it's not an understanding that should be perpetrated on screen. However, the movie does steer clear from that path, and instead focuses on the redemption of a mistaken man. This is a story we have seen before, even just this past year with Three Billboards Outside Ebbing, Missouri with Sam Rockwell's character, for which he was nominated for an Academy Award. However, Rockwell's transformation in Three Billboards is far better realized than Bale's. Rockwell and Bale's characters do share some similarities: they are good men at heart, but have fallen victim to allowing their inner evil to get the best of them, and have become consumed by hate. But Rockwell has a key turning point where he sees the light, and realizes how pointless his hatred actually is. Bale doesn't have that same moment of reckoning. He has a point where he changes, but it is not nearly as profound nor as emotionally satisfying as Rockwell's is. This disparity makes it hard to fully stand behind Bale's character arc.

On a technical level, Hostiles is flawless. Masanobu Takayanagi, who has shot films such as Silver Linings Playbook and The Grey, delivers some of his best work yet. Beautiful wide shots of the open wilderness showcase not just the elegance of these landscapes, but it also reflects the characters' isolation. And that is a hallmark of excellent cinematography, when it can not only result in a gorgeous looking film, but it can also just as effectively communicate the plight of the characters. The score lurks in the background, and at times rises above the film. It really is a strong score, one that I came to really appreciate. The first and third acts do a great job of balancing the narrative with dialogue beats and action sequences, making them rather well-rounded. However, the second act focuses entirely on dialogue, and becomes rather redundant. There are far too many repeated conversations and repeated scenarios, without any sort of action sequence to break it up. Movies don't need continuous action scenes to keep me entertained; a compelling story and intriguing character will hold my attention just fine. But for a film like Hostiles, something is needed to break up the redundancy, and an additional action scene in the second act would have sufficed. 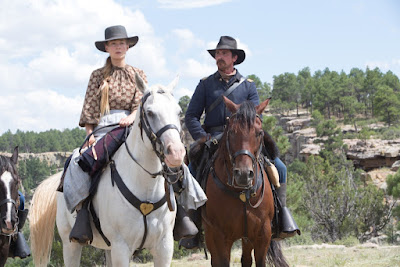 Overall, Hostiles is an interesting Western that has fantastic set-up and a hard-hitting finale, but meanders quite a bit in the middle. Christian Bale presents a misguided leading character, a man so set in his ways that he would rather be professionally disgraced than aid a Native American. He comes to grips with his prejudice, though his pseudo-redemption isn't nearly as satisfying as it should have been. This does not take away from how good Bale is in the role; it's more of an issue with the writing. The film delivers on some impressive technical elements, with breathtaking cinematography and an excellent score. However, what keeps Hostiles from being truly great is its pacing. It has a strong first and third act, but the second act is filled with redundancies. It feels as if Scott Cooper did not have enough of a story to last the full three acts, so he simply drew out the second act in order to occupy time. And with the film clocking in at two hours and fourteen minutes, this poor pacing makes a long movie feel even longer. Fans of Westerns may innately have more patience, and thus may get more out of this movie. But while I personally enjoy a lot of what this movie has to offer, Hostiles is missing a few things that keep it from being one of the best of 2017. 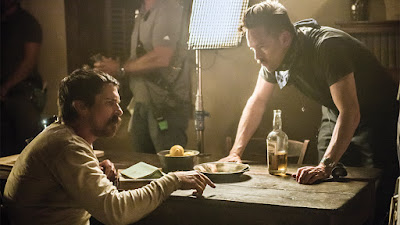 What do you think? Have you seen Hostiles? If not, are you planning on seeing it? Leave your (spoiler-free) thoughts in the comments section below.