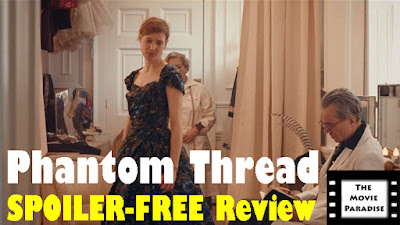 
Most men, when trying to woo a woman, are looking to take her clothes off. Daniel Day-Lewis in Phantom Thread, however, looks to put more clothes on. In his final role before his supposed retirement from film, Day-Lewis plays Reynolds Woodcock, an enigmatic fashion designer in 1950's London who is consumed by his work. He is the most eccentrically elitist dress maker you could possibly find. If you eat your toast too loud during breakfast, you have ruined his entire day--that's the kind of man we're dealing with here. And this presents a challenge for Alma (Vicky Krieps). She is in love with this man because of his idiosyncrasies and his dedication to his craft, but those are the exact things keeping them apart. A conversation they have drastically changes her approach to winning him over, as she begins to play the same "game" she perceives him to be playing. And with this comes a fascinating back-and-forth over who will dominant their relationship. Phantom Thread presents a truly interesting look at the relationship between an artist and his art, and how that relationship affects those close to him. Simultaneously, it also showcases a rather toxic partnership between a man and a woman, and the extents they will go to to manipulate each other. 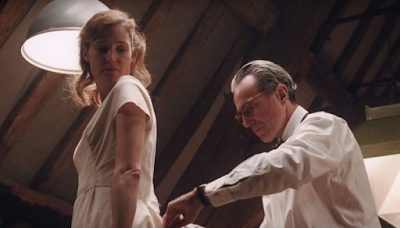 Going into this movie, I was afraid I would find it to be boring. I knew it was going to be a good movie, simply due to all of its Academy Award nominations (see those here). But I never really thought it would be a movie I personally would find interesting. However, Phantom Thread proved me wrong. Other people watching this movie may not find it nearly as captivating as I do, but this film genuinely riveted me. It speaks to the power of the performances, the strength of the directing, and the excellence of the writing that a two hour movie about a 1950's fashion designer could be as engaging as it is. Really, the core of this film is Daniel Day-Lewis as Reynolds. He is fantastic in this movie, and captures the nuances of his character brilliantly. He brings such depth to his character that it allows you to buy into the movie as a whole. Both Vicky Krieps and Lesley Manville are great as well, and hold their own playing off of a master of the craft. These three performances work in unison to heighten the stakes at hand, as well as to elevate the tension of the film. Yes, there is tension and high stakes that accompany fashion design, and it feels absolutely genuine. Day-Lewis effectively convinces you that making sure a dress is correctly sewn is the most drastically imperative thing in the world, due to the power of his performance.

What truly caught me, though, is what this movie says about artists. There is a scene where Day-Lewis storms into a customer's house and has Krieps strip her dress from her while she sleeps, because he views her as unworthy of wearing his work. Because for Reynolds, this isn't a job; he is an artist, and this is his work of art. The film captures this war between artistry and consumerism, and how it weighs on artists, in a really fascinating way. But at the same time, Phantom Thread displays a toxic relationship between Reynolds and Alma. She desires the man, not exactly the artist. He puts all of his time and energy into his work, and not his relationship. And while that may initially sound rather stereotypical, Paul Thomas Anderson takes it in a different direction than you would expect. The unhealthiness of that relationship is taken to a slightly sadistic level, and it makes the movie all the more interesting. On a technical level, this film also succeeds. It has beautiful costume design, as you would expect from a movie of this nature. But Phantom Thread also has gorgeous cinematography and a stellar score, which stand out as being some of the best of this past year. The film could have been a little shorter, and the ending was kind of ambiguous as to what the future holds for these characters. But those are truly my only negatives for this film. 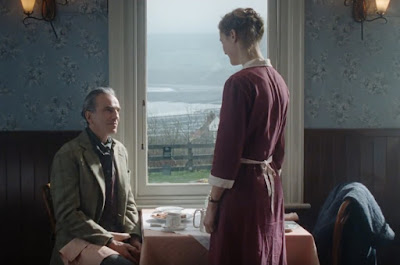 Overall, Phantom Thread is a surprisingly captivating film from Paul Thomas Anderson, led by top-notch performances from Daniel Day-Lewis, Vicky Krieps, and Leslie Manville. While some may find it boring or tedious, I was rather absorbed in it. It has a lot to say about artists, and their relationship with their work. The struggle between artistry and commercialism is highlighted in a great manner, and it really made me sympathize for Reynolds' plight, being an artist of sorts myself. But it simultaneously gives us a fascinating dynamic between Reynolds and Alma, one that goes in unexpected directions. These character decisions helps keep Phantom Thread from dragging too much, or feeling redundant. All the technical elements are superb, and really make this film stand out. It is a little bit too long, and could have been between ten and fifteen minutes shorter. And the ending is somewhat ambiguous, and not in a positive, speculative way. Phantom Thread may not work for everyone, but it struck me the right way. And while I don't necessarily feel the need to see it again, I rather enjoyed myself watching it. 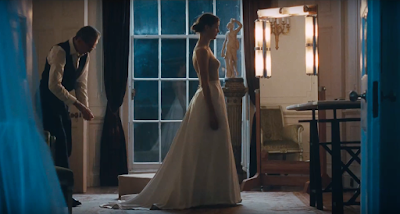 What do you think? Have you seen Phantom Thread? If not, are you planning on seeing it? Leave your (spoiler-free) thoughts in the comments section below.