For months on end, the one unanimous cry from Star Wars fans has been this: "Where the fuck is my fucking Solo: A Star Wars Story trailer for fuck's sake??!!" Personally, I think the fans have been a little impatient. I've been more concerned that we've had zero marketing for the film. Not just no trailer, but we've seen absolutely nothing from this movie whatsoever. That's what is more bizarre to me. Usually you have some stills, a couple of posters, maybe a behind-the-scenes featurette, and then the trailer. But we've had nothing. We can't pretend that Solo hasn't had its share of production problems, however. Directors Phil Lord and Chris Miller were fired with only a couple weeks left in production, and Ron Howard was brought on to reshoot almost all of the movie. And this is on top of the fact that not many people were excited for a Han Solo origin story to begin with. Solo is a film I'm only interested in because it's Star Wars. It didn't make my most anticipated list of 2018; it's not a movie I'm clamoring to see. But I'll be going to the theater to see it because it is Star Wars. But Disney will have to give us a hell of a trailer in order to get me actually excited for this movie, so a lot depends on this first trailer. And now we have that first official trailer for Solo: A Star Wars Story.

This was incredibly disappointing. Now, I loved the spot they dropped during the Super Bowl. It captured the world of the Original Trilogy perfectly, and set up the character of Han Solo (Alden Ehrenreich) in a really interesting way. You can check out that spot here. But this trailer didn't really have any of that footage. Everything cool and slick about that spot was absent from this trailer. Instead, this trailer showcases a character they refer to as Han Solo, but he doesn't act nor feel like the character we know and love. He doesn't have the gruffness that Harrison Ford brought to the role, nor does he have any of the charisma that makes him such a lovable character. From the beginning, I have defended the casting of Ehrenreich. Whereas many said he looks nothing like Ford, I thought there was a striking similarity between the two that I thought could manifest itself well with this adaptation. However, from what we see in this trailer, the character Ehrenreich plays bares little resemblance to the Han Solo we know. The world-building of the spot was also missing from this trailer, and it instead focused on big spectacle moments. I don't think this a bad trailer. However, I was hoping that we would get a trailer that would drastically change my tune about this film, and get me on board with it. And unfortunately, this trailer really misses that mark. 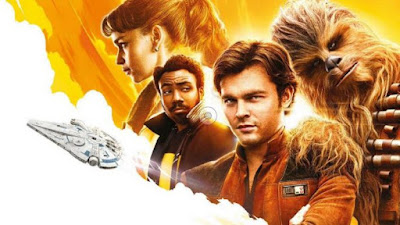 What do you think? Did you like the first trailer for Solo: A Star Wars Story? Are you planning on seeing the film? Leave your thoughts in the comments section below.