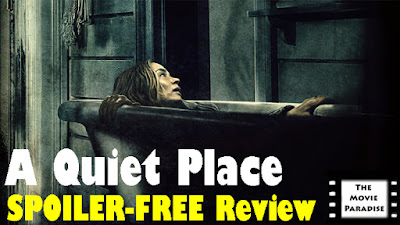 
If they hear you, they hunt you. That is the tagline that was on every poster, and in every trailer, for A Quiet Place. And it is an incredibly effective tagline. It's succinct, and it gets the point across. Directed by and starring The Office star John Krasinski, A Quiet Place focuses on a family surviving in a world without sound. In order to hide from monsters, they must remain completely silent. However, as happens in most horror movies, something happens to attract the attention of these monsters, and shit goes down. Ever since I saw the first trailer, I have been incredibly excited for this movie. We've seen Krasinski direct in the past, yes, but this looked like something completely out of his wheelhouse. If he could deliver on this, then Krasinski would establish himself as a brilliant up-and-coming director. The film also stars his wife, Emily Blunt, who is ridiculously talented. The two of them together, in this intense horror movie, could make for an incredible film. And A Quiet Place is just that. Krasinski delivers on a film that makes you hate and fear sound. But while it is a terrifying movie, the horror is not the focus of A Quiet Place, but rather the dynamics of this family and their struggle to stay alive. 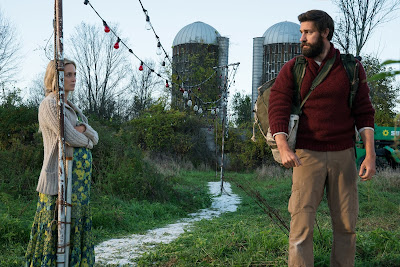 Krasinski employs a lot of simple filmmaking tricks that are used incredibly effectively. Right from the beginning of the film, Krasinski establishes sound as the enemy. There are long stretches in the movie where it is absolutely silent, and you come to fear the slightest creak. "Will this be the noise that attracts the monsters?", you wonder. This tool is genius, as it adds another level of terror and anxiety just through diegetic sound. Thus, the sound design work on this film becomes crucial in selling the horror. I don't think A Quiet Place will be up for a lot of Academy Awards, but it absolutely should be considered for its sound work. It is used strategically and meticulously to help shape the terror of the situation. I've never seen sound used more effectively before in a horror movie, and I believe it to be one of A Quiet Place's greatest accomplishments. The performances are also spectacular. Emily Blunt and John Krasinski obviously have excellent chemistry, and it radiates on screen. We don't get a ton of scenes with them together, but when we do, they feel like an honest, regular couple. Blunt takes the lead in this film, and she never becomes the damsel in distress. She certainly has moments where she is in danger, but she problem solves and works through it just as Krasinski does. The child actors, specifically Millicent Simmonds, are all great as well. Child actors in horror movies (or just movies in general) usually don't work for me, but these kids add so much to this movie. I applaud not just their individual performances, but also Krasinski's direction in getting such realistic and power-packed performances out of them. 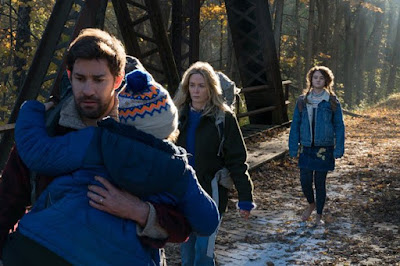 Due to the nature of the film, there aren't many opportunities to delve into exposition. Krasinski forces the film to show far more than it can tell, and it makes for an even more powerful movie. I won't go into specifics, but Krasinski has a strained relationship with his daughter, played by Simmonds. There is some dialogue between them, but a lot of the depths of their relationship is told through their facial expressions. You're able to understand the full extent of their thoughts and feelings just through a look, and that is the power of the show-not-tell philosophy. The power of these shots would have been entirely lost had Krasinski or Simmonds had a monologue explaining how they feel. Krasinski limits himself with his initial concept, and it makes his filmmaking even stronger. And really the heart of this movie is the family dynamics. The monsters aren't involved in the story too much, nor should they be. They have a presence far more than they have actual screen time, and this makes them even more terrifying. Krasinski understands that-- in horror movies-- there is more power in what you don't see rather than what you do see. These monsters have an important role in the movie without ever being the focus, and this leaves room for the inter-personal relationships between the characters to be the focus instead. Since the characters are stronger, we feel for them more, which makes the horror all the more terrifying. 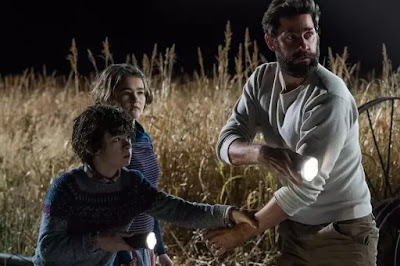 Overall, A Quiet Place is a brilliant directorial effort on John Krasinski's part. The very concept of a family having to be silent to evade monsters that hunt by sound limits what Krasinski can do with the film, and that makes what he does do all the more effective. He is forced to adopt a show-not-tell policy, which enriches the character development and family dynamics. From the start, Krasinski makes you hate and fear sound, and, by making sound the enemy, he perfectly puts you in the mindset of the characters. The sound design in the film becomes crucial, and it's pulled off spectacularly. The performances are all excellent, and the child actors surprisingly add a lot to the film. This movie flies by super fast. It's an hour and a half, but as soon as the credits began to roll, I would have sworn only forty five minutes had passed. So while A Quiet Place isn't my favorite horror movie of all time or anything like that, it does show that keeping it simple can make for a stronger movie. Krasinski utilizes simple tricks and simple filmmaking tools, and it makes for an incredibly terrifying film. With this outing, he proves that he is a director who is here to stay, and may become one of the best new directors working today. 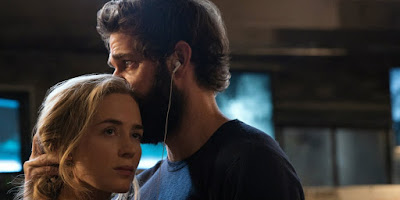 What do you think? Have you seen A Quiet Place? If not, are you planning on seeing it? Leave your (spoiler-free) thoughts in the comments section below.