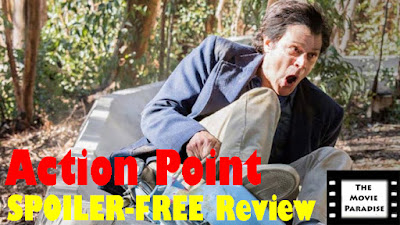 There is a certain stipulation that comes with any Jackass movie. You're not sitting down for an Oscar caliber movie. You're not expecting great film. Rather, you're coming to see a bunch of dumb guys getting hit in the nuts, falling into cacti, and wrestling with dangerous animals. The real life stunts, and the shit these guys put themselves through for a laugh, is why you go, and it is endlessly entertaining. With Action Point, star Johnny Knoxville is going in a different direction. Instead of the film just being a bunch of sketches and stunts edited together, there is an actual story going along with it. It's a real movie, with a narrative and characters and everything, but all the stunts are done for real in true Jackass form. The blend is an interesting idea, and it's one that made me actually kind of excited for this movie. Bad Grandpa had some narrative to it, and it actually worked out pretty well. But I was interested in seeing how it would work when they went completely in on it. And it works out quite well, actually. Action Point isn't a great movie, but it's entertaining as hell. I had an excellent time in the theater, cracking up laughing with all my friends, enjoying this movie. Is it stupid? Yes, absolutely. But if you like the style of humor that the Jackass movies present, then you're going to enjoy Action Point. The movie centers around D.C. (Knoxville) who, in his elder years, recounts to his granddaughter his glory days of operating a sketchy amusement park called Action Point. 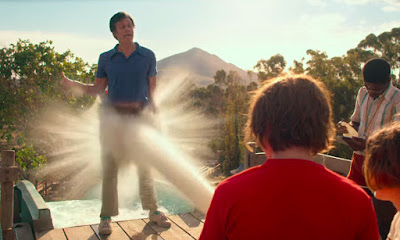 There is no use discussing the merits of this film. I'm not going to assess Tim Kirkby's directing job, or whether the screenplay fleshed out the characters, or the nuances of Johnny Knoxville's performance. All of those points are null with this kind of movie, because the point of the film is not to be a good, quality movie; it's to be a good, quality movie theater experience, and that's exactly what this is. This movie is classic Jackass. Characters go flying off of things and hit the ground hard. There are tons of groin-punches and heavy hits. Everything you associate with Jackass, and love about those movies, Action Point has. But even outside of the physical comedy, the situations these characters get themselves into are hilarious. They really play up the idea that this is a sketchy amusement park that thrived back in the day before rules and regulations were truly upheld. That idea is hysterical, and they play it up perfectly. The park in the movie is based off of a real amusement park. I don't know how many--if any--of the events in this movie actually happened, but just the fact that something like this actually existed is really funny to think about. And it makes the craziness of the situations even more extreme. With both kinds of comedy, Action Point delivers. Whether its the crazy stunts that Johnny Knoxville is known for, or the situational comedy, this movie excels at both of them, and makes for a really fun time at the movies. 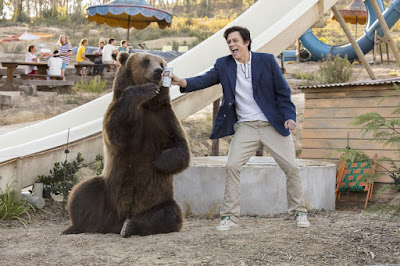 The blending of the narrative film with the Jackass stunts works really well. Action Point runs the risk of taking itself too seriously, but it doesn't. It puts in the work it has to in order to have characters you can enjoy and root for, as well as to have a compelling story, but it doesn't overdo it. It doesn't spend too much time trying to build a narrative nobody cares about, or trying to develop characters that just take time away from the gags. It does what it needs to do in order to have a satisfying story in place, and then it runs amok with the craziness. This balance is exactly what this movie called for. Action Point knows exactly what kind of a movie it is. It does just enough to not feel hollow, and then it lets its classic style of comedy take over. Even when it does take moments to build the relationship between D.C. and his daughter (Eleanor Worthington-Cox), it feels earned. It doesn't feel unnecessary. During these points, I never felt like Action Point was trying to take itself too seriously, or was wasting time. It feels natural, and it gives a basic level of depth to its characters that only enhances the stunts. Action Point strikes a really good balance between developing the narrative film and the crazy stunt comedy, and it makes it a satisfying movie theater experience. It may sound like I'm raving about this movie, but I'm not. It's stupid as fuck, and it's not for everyone, but I had a great time watching it. This is not the kind of movie that will please everyone. If you think the Jackass style of comedy is just plain stupid instead of stupid-funny, then you're going to hate this movie. But for me, I had a lot of fun watching Action Point. Overall, it accomplishes what it sets out to accomplish, and I enjoy it for what it is. 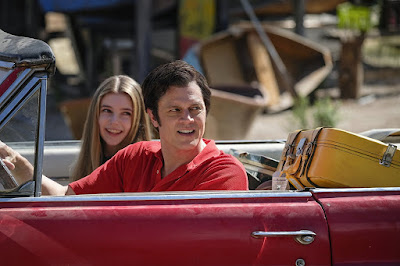 What do you think? Have you seen Action Point? If not, are you planning on seeing it? Leave your (spoiler-free) thoughts in the comments section below.