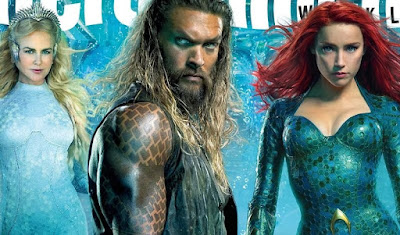 After Justice League crashed and burned at the box office in November, all eyes have turned to Aquaman, which is coming out just over a year after the failed team-up film. Can the James Wan (The Conjuring) directed movie revive the DC Cinematic Universe, and put it back on the right track before Shazam and Wonder Woman 1984 (read about that here) hit theaters? I hope so. I love James Wan as a director, and I think he is an excellent fit for something like Aquaman. He is a creative force, and you need someone like that when constructing entire underwater worlds. Similarly to how Wonder Woman was isolated from the rest of the DC Cinematic Universe because it was set during World War I, Aquaman is also isolated because it takes place underwater. You can tell a complete story without feeling the need to reference or set up any other movies in the universe, and that's exactly what DC needs right now! But since Justice League's release, where Jason Momoa made his official debut as the character (his minor cameo in Batman v. Superman: Dawn of Justice not withstanding), we haven't heard much about the underwater epic. That is, until now.

Entertainment Weekly has given us our first look at Aquaman, releasing a series of images from the film. You can view them for yourself below: 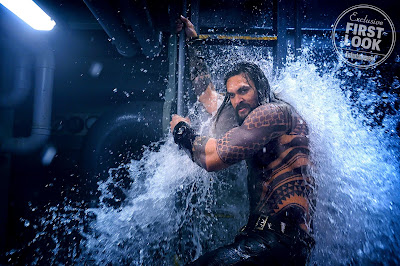 Jason Momoa as Aquaman and Amber Heard as Mera 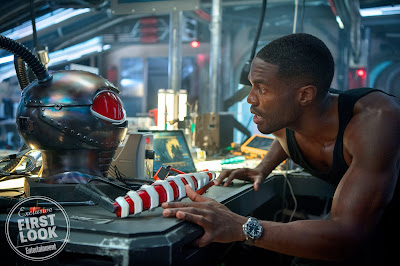 Jason Momoa as Aquaman and Patrick Wilson as King Orm 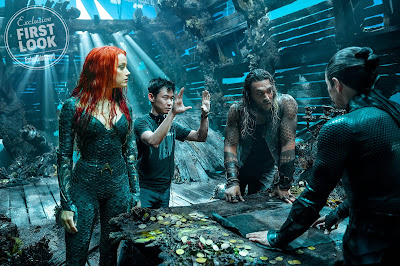 The Warriors of Xebel versus the Atlantians

I absolutely love the look and feel of this movie so far. Granted, the trailer or even the movie could completely change that, but the looks of these pictures are exactly what I want from an Aquaman movie. Jason Momoa looks like an absolute badass, and he epitomizes exactly what this character needs to be. Gone is the Aquaman that is friends with fish and swims around in an orange leotard. This is the true Aquaman, and Momoa is perfect for the role. Amber Heard looks fantastic as Mera, as does Nicole Kidman as Queen Atlanna. The image that especially stands out to me is of Yahya Abdul-Manteen II as Black Manta. The Black Manta helmet is perfect, and is exactly what I was hoping it would be. It looks like the comics, but they scaled down the size of it so that it doesn't look ridiculous. Black Manta is such a cool comic book character, and I can't wait to see him portrayed on screen. The last image too of the sea horses fighting the sharks looks incredible. It is this sort of thing that a movie like Aquaman can do, and it's stuff we haven't really seen before. I think the scope of this movie is going to be absolutely incredible, and James Wan is going to deliver on some things that haven't been explored on film before. At least, that is what I'm hoping. 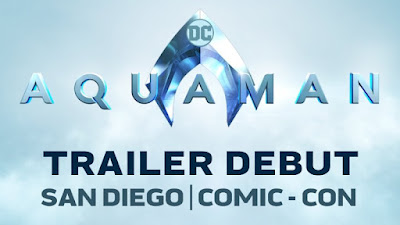 I know a lot of people were expecting it to drop this week, following the Entertainment Weekly spread. However, this makes the most sense. DC has a great opportunity to make a big splash (ha, ha) at Comic Con this year, and to really get people hyped for their next couple movies. While I'm sure we'll get some more information about Shazam and Wonder Woman 1984, the biggest thing they can push is Aquaman. So it just makes sense to drop the first trailer then. As much as I like these first images from the film, I cannot wait to see the trailer. I want to get a sense of the scope of the movie. I want a look at the epicness, and at the battle sequences. I really do think they are going for a big scale film epic with Aquaman, and I want to get a tangible sense of that from the trailer. Look, the trailer could suck. The movie could suck. But I am really starting to get excited for an Aquaman film. Justice League somewhat turned me off from the movie but now, as we are getting further and further away from that film, my excitement for Aquaman is building. Hopefully the trailer will be able to do that for every other skeptic out there. 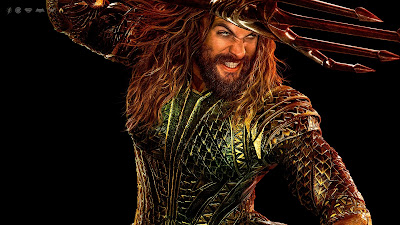 What do you think? Do you like our first look at Aquaman? Is it more or less what you were expecting? Are you surprised at all that the trailer will be released at San Diego Comic Con? Leave your thoughts in the comments section below.