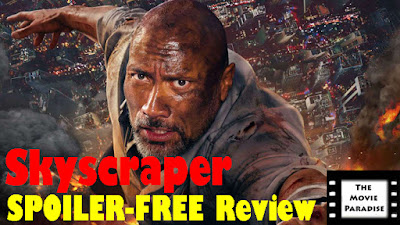 
Dwayne Johnson has been on a roll lately. Whether you're talking about The Fate of the Furious, Baywatch, Jumanji: Welcome to the Jungle or Rampage, the Rock has been in just about everything. It doesn't matter if the movies have been terrible and have under performed (Baywatch), or if the films have surprised everyone and have had massive box office success (Jumanji), Johnson has become one of the biggest movie stars on the planet and elevates every film he is in. And things are no different with Skyscraper, his latest outing. Now, I haven't been super on board with Skyscraper. I've been interested really only because it stars the Rock, but that's about it. The trailers haven't really made it out to be anything extraordinary. It looks like Johnson's attempt at Die Hard, which isn't necessarily a bad thing to say. It just means that it didn't look Skyscraper was going to give us anything new. But I went into the movie with an open mind, and I enjoyed it for what it is. Skyscraper has some thrilling moments and decent action sequences, led well by Dwayne Johnson. But there's nothing in it that makes it stand out as being something that will last long in the public consciousness. 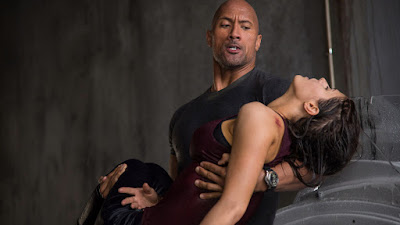 Skyscraper actually does some really interesting things with Johnson's character of Will Sawyer. As evident from the trailers, he is a veteran who is an amputee, and this gives him limitations. With the Rock being who he is, it is easy for him to come across as a superhero on screen, and Skyscraper takes active steps to give him flaws and limitations. He doesn't go around kicking everyone's ass with ease; he takes more punches than he deals, and he fails a lot. It is things like this that make me appreciate this film, because it shows that they are trying something different. They are trying to make Will Sawyer a compelling character, and it's a new challenge for someone like Dwayne Johnson. Now, it doesn't work to the degree that suddenly Johnson should be nominated for an Academy Award and Skyscraper is one of the best films of 2018, but it does take what could be a subpar movie at best and makes it above average. I would rather a movie that is simply a solid film try to be better than just accept what it is, and that's what Skyscraper does. Now, as the film goes on, it does resort to being a bit of a ridiculous action movie. Johnson does things that only work within the context of an action movie, and that's fine. The action sequences are far better than I was expecting, especially one that happens in a kitchen. There are parts of this movie where the tension builds nicely and you feel the adrenaline rising within you. While I wasn't a fan of his previous collaboration with Johnson on Central Intelligence, director Rawson Marshall Thurber does a good job with this movie. He builds the stakes nicely, and he delivers on a entertaining little movie. 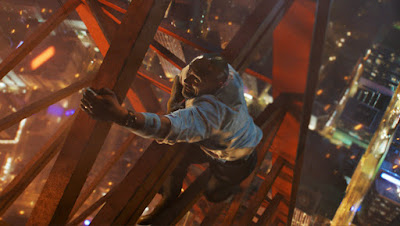 While this movie may be trying to emulate Die Hard, it fails in carrying over the brilliance of that movie's antagonist. The steps they take to make Will Sawyer a more compelling character are great, but it leaves lackluster and uninspiring villains. Their motivations are rather flimsy and convoluted, and they come across as more mustache-twirling than having any real substance to them. They are simply the threat and an obstacle for Sawyer to get through, rather than being compelling themselves. And this is where Skyscraper becomes merely average. They try to be above average with their protagonist, but they slip right back into typical action movie conventions with their villains, and that is disappointing to see. It isn't entirely unexpected, but disappointing nonetheless. Overall, Skyscraper is better than it could have been, but it's still nothing remarkable. It tries to do something different with its leading character, which I really appreciate. They humanize the Rock, and they don't make him some invincible superhero. The limitations they put in place make him more compelling, and I really like that direction they went in. However, the rest of the movie--especially the villains--are still average, and it makes for a film that is going to come and go. Skyscraper is enjoyable for what it is, and it is a decent time at the movies, but it's the kind of film that people will completely forget about in a few weeks' time. 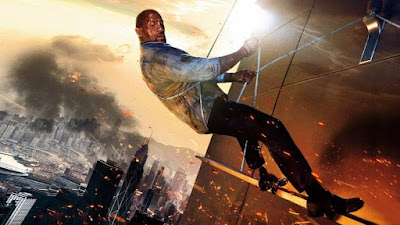 What do you think? Have you seen Skyscraper? If not, are you planning on seeing it? Leave your (spoiler-free) thoughts in the comments section below.